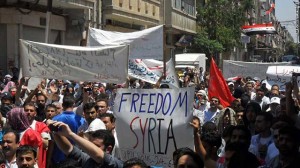 Syrian protesters taking to the streets again Friday are highlighting their opposition to a government-backed dialogue process in the latest display of grinding discontent across the angry Arab land.

More than 100,000 people gathered in the main square of the western city of Hama, wracked this week by discord, but no violence has been reported yet, according to Rami Abdelrahman, president of Syrian Observatory for Human Rights.

Security forces used tear gas and fired in the air as demonstrators gathered in the western city of Homs, the northern city of Raqqa and the Damascus suburbs, said the Local Coordination Committees of Syria, an activist group. One protester was injured in Raqqa, it said.

Thousands gathered in coastal city of Latakia, the northeastern cities of Qamishli and Hasaka and the southern metropolis of Daraa.

The theme of the nationwide marches after Muslim prayers is “no dialogue,” a reference to a “consultative meeting” Sunday of the National Dialogue Committee.

“The meeting seeks to lay down the dialogue mechanisms and bases ahead of the national dialogue conference,” according to the state-run Syrian Arab News Agency.

The agency reported that the committee has met with opposition and independent political and intellectual figures and invited them to the meeting. Various pieces of legislation are on the agenda.

Demonstrations have erupted in big and small locations across Syria every Friday for weeks, when protesters have gathered after prayers, including in Hama, the scene of much discord this week.

After a series of peaceful demonstrations, including a huge anti-government demonstration last Friday, Syrian President Bashar al-Assad fired the Hama provincial governor Saturday and a fierce crackdown ensued in the area, with activists and Human Rights Watch reporting many arrests and deaths. Citizens called a general strike.

On Thursday, Robert Ford, the U.S. ambassador to Syria, visited the city as part of what the State Department called an effort to show American support for Syrians fighting for democracy.

Ford visited Hama “to make absolutely clear with his physical presence that we stand with those Syrians who are expressing their right to speak for change,” according to State Department spokeswoman Victoria Nuland.

The ambassador met with over a dozen Hama residents and visited a hospital that has treated some of those wounded in the security forces crackdown, Nuland said, adding that he was greeted with a “very warm welcome.”

The state news agency SANA reported that a Foreign Ministry source accused Ford of going to Hama without obtaining permission from the government. According to the report, the Foreign Ministry official said Ford’s visit was “clear evidence of the U.S. involvement in the ongoing events in Syria and its bids to aggravate the situations which destabilize Syria.”

Nuland, however, said U.S. officials notified the Syrian government that an embassy team was traveling to Hama.

Ford’s delegation did not include any official Syrian “handlers,” Nuland said, adding that Syrian authorities allowed him through checkpoints to reach the town.

Last month, Hama was the site of violent crackdowns by security forces that killed 60 protesters.

The city is a sensitive spot for Syrian authorities. In 1982, it was the scene of a brutal military crackdown targeting Sunni Muslims by the Alawite-dominated government of Hafez al-Assad, the current president’s late father. Thousands were killed; Human Rights Watch put the toll at 10,000. 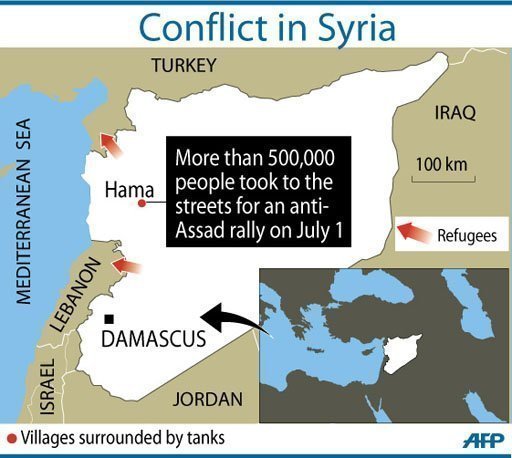