March 14 to boycott the vote of confidence session, report 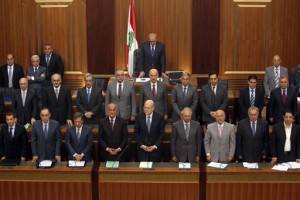 Sources closely associated with March 14 alliance told Kuwaiti newspaper al Jareedah that the alliance will boycott the cabinet’s vote of confidence session at the parliament meeting in an attempt to undermine the constitutionality of the newly formed cabinet , specially because the largest Sunni parliamentary bloc won’t be present .

The sources said March 14 will not enter the main parliament hall to vote, and abstaining from voting will render the session unconstitutional .

Thursday will be the third and last day of the parliamentary session aimed to debate the ministerial policy statement of newly-formed government and to grant it the vote of confidence.

Ya Libnan could not confirm al Jareedah’s report

There were also unconfirmed reports that outgoing PM Saad Hariri will make a surprise visit to Beirut on Thursday , but again due to security reasons this may be just another rumor since he reportedly received many threats on his life.

March 14 MP Mohammad Hajjar said on Wednesday that the primary mission of the newly-formed government is to confront the Special Tribunal for Lebanon, a UN-backed court investigating the 2005 murder of former Prime Minister Rafik Hariri, calling on the cabinet to quit adding that he will not grant it his vote of confidence.

Hezbollah and its allies deliberately brought down the government of outgoing PM Saad Hariri in January in anticipation of the indictment in the murder of his father .

Update: Al Mustaqbal has just denied reports that outgoing PM Saad Hariri will be in Beirut on Thursday