Geagea pessimistic about the cabinet’s intent towards STL 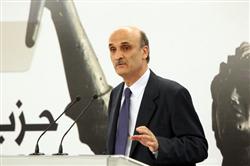 Lebanese Forces leader Samir Geagea sounded pessimistic over the cabinet’s intents regarding the Special Tribunal for Lebanon. He said “their intents are not pure.”

He also said that the cabinet is “obliged” to cooperate with the STL and implement all that the tribunal requests, adding that if it rejects to cooperate and implement the arrest warrants submitted earlier by the STL, “we will have no choice but to use peaceful means to overthrow this cabinet.”

Geagea added that if the cabinet does not cooperate with the tribunal, it will be in direct confrontation with the UN Security Council as well as Arab and international parties.

Local media said at least two of them were members of the Iranian and Syrian-backed Hezbollah, which has warned it would defend itself if accused.

The STL clause in the ministerial statement of Najib Mikati’s cabinet states the following :

“The cabinet assures it will respect international resolutions and continue the path of the tribunal that was established to achieve justice and righteousness away from politicization and in a way that does not harm Lebanon’s stability and unity,”

MP Antoine Zahra , who represents the Lebanese forces in the parliament also sounded pessimistic about Mikati’s ability to lead a Hezbollah backed government :”Mikati cannot run his cabinet …this is not his government …this government belongs to Hezbollah and Syria . This became obvious today from the ministerial policy statement . Running away from cooperation with the UN is against the Lebanese constitution