by yalibnan
2696
The so-called democratic government of Israel has two systems of education and two different curricula in its present day Apartheid system of Education.
Share: 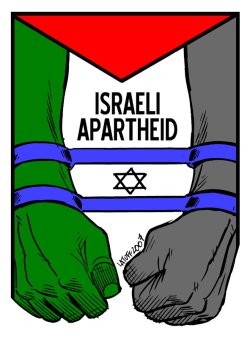 The so-called democratic government of Israel has two systems of education and two different curricula in its present day Apartheid system of Education.

The funding for the so called Arab Schools is at least 50% LESS than that for the Jewish Schools, but that is not all!

The Curriculum and Identity Report, (May 2011) researched by a group of academics and published by the Arab Cultural Association, examined the contents of textbooks approved by the Ministry of Education as well as the Curricula for various Subjects in Arab schools, and found an unbelievable number of mistakes, distortions, and lies with regard to the Arabic language and the history of the area.

Israel is violating a number of Human Rights with regard to the Arab children living in Israel:

In the Israeli Apartheid System of Education, Arab Palestinian children, who are citizens of the State of Israel are being denied their right to learn their mother tongue correctly, to know and identify with their Arab culture, history and heritage.

The first violation concerns the children’s right to learn their mother tongue the Arabic language. Thirty-one textbooks for use in Grades three to eight, which were all approved by the Ministry of Education for use in Arab schools, were found to contain more than 16000 mistakes. This means that Arab children are taught their language inadequately. Is this a way to sabotage the Arabic language and therefore the identity of Arab children?

The second violation of rights concerns access to the Arab culture, including music, dance, art, literature, cooking, handcrafts and customs. The State of Israel has NO CURRICULUM for most of the above subjects in Arab schools. However, in Jewish schools Jewish cultural activities flourish! While Jewish schools have Music Rooms full of musical instruments and other relevant equipment, the majority of Arab schools do not even have an electronic keyboard.

There is a curriculum for Arabic Literature, but the material is fraught with errors of all lingual types, including syntax, morphology, semantics, spelling and phonetics. Furthermore the range of Arab writers included in this Curriculum is extremely limited with no modern writers at all. Thus, Arab children are deprived of their right to be familiar with and to learn and appreciate modern Arab literature.

There are also subtle ways in which Arab culture is negated and disparaged, making Arab children feel inferior and marginalized. Examples of these are found in the Hebrew Curriculum for Arab schools in which there is the implication that Arab parents are irresponsible and uncaring, aggressive and materialistic. Furthermore, in the Civics Curriculum for Arab schools, Arab children are overtly instructed that their first allegiance is to the State of Israel, as Israeli citizens. They are also encouraged to have regional and religious associations, but they are never encouraged to acknowledge and be proud of their Arab identity. In these ways, the State of Israel is denying its Arab citizens accurate and positive role models of their culture and ethnicity, while blatantly violating the Arab children’s right to their cultural identity as Arabs.

The third violation of rights concerns Arab children’s right to know their history. The history textbooks for Grades five, six, seven and eight that are used in Arab schools completely ignore the existence of the Arab Palestinian population which lived in this land prior to 1948. Instead, these textbooks are a databank for the Jewish history and emphasize the biblical right of the Jews to the land. This distorted presentation of the history of their country clearly denies the indigenous Arab children their right to know that the Arabs have lived on this land for thousands of years. It denies them the knowledge that the Arabs were the majority in this country until the establishment of the State of Israel in 1948. Therefore, Arab children are deprived of accurate details regarding their history, their connection to the land and the continuity of the Arab Palestinian narrative.

The fourth violation of rights concerns Arab children’s right to know and have a connection with their heritage. Heritage includes the stories, myths and legends of a group, as well as the law, traditions, philosophy, land and property, practices and ways of life which are transmitted from the past. In the Geography Curriculum most traces of the past are erased because the Arab children are only taught the Hebrew names of all villages, towns, rivers, mountains and regions, ignoring the original Arabic names. In addition, any connection to the history of the country is severed in the Hebrew Curriculum when Arab children are taught that they are the descendents of Abraham and Hagar and therefore outsiders, originating from another country.

In conclusion, one wonders at the atrocious behavior of the State of Israel in relation to the education of its Arab citizens! Is it a plan to dehumanize the Arab population? Is it a deliberate strategy to construct an Israeli awareness amongst the Arab population as a means of controlling and manipulating them, while at the same time marginalizing them?

*The author is living and working in Israel