Lebanese Forces leader Samir Geagea said during a ceremony to adopt his party’s by-laws:”  Some sides didn’t expect the Lebanese Forces to succeed when it agreed to the national charter and decided to take part in the building of the state”, adding that “some even believed that an LF without arms would fail, but we proved them wrong …our position is now stronger than any weapons.”

Geagea said the “LF survived despite all the oppression. It bloomed during the spring of March 14, 2005 ( in reference to the Cedar Revolution which resulted in the withdrawal of the Syrian troops from Lebanon and the eventual release of Geagea from jail) , and it is now heading along the course of change and democracy through the adoption of its by-laws.”

Geagea voiced regret over the formation of  the new Lebanese cabinet “that represents perishing Arab regimes.”

“It is unfortunate that while the the Arab world is heading towards democracy,… we see Lebanon which has spearheaded democracy in the region is taking several steps back… through the formation of a cabinet that is considered to represent perishing Arab regimes,” Geagea said .

“How can we, as Lebanese, explain the kidnapping of non-Lebanese citizens and their deportation back to their own country without abiding by legal principles?” Geagea asked in a reference to the deportation by force of Syrians who fled to Lebanon following the uprising in their country.

“How can we explain the pro-Syrian regime position of Lebanon at the UN Security Council,” he asked, adding that it makes Beirut appear to accept oppression in the Arab world. A possible reference to the objection by Lebanon to the the draft of Security Council resolution condemning violence in Syria.

Geagea added :” On this occasion, we can only but announce our sympathy with the Arab people who are seeking freedom and modernity “adding this is probably the first time that the peoples in the region are united in their demands for freedom, dignity, and freedom.” 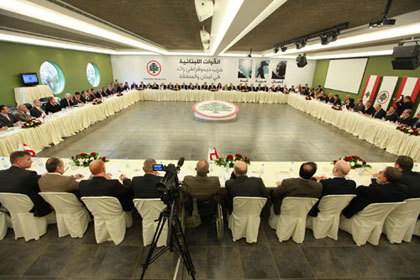