One of the ways Bashar al-Assad has tried to clamp down on the Syrian revolution is by restricting people’s access to the Internet. Since March 15, when the first protests in Syria began, anti-regime activists have uploaded thousands of YouTube videos and blog posts and social network updates showing not only their force of number but the violence by which their calls for freedom have been met. 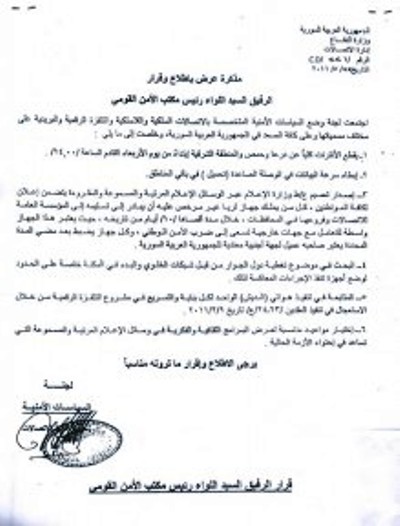 Here (see picture above) is another Syrian state document sent to me by a trusted source.

This one, allegedly issued by the General Head of the National Security Office at the Ministry of Defence, shows how Assad’s regime ordered Internet access cut in Deraa, Homs and other eastern provinces starting on May 22 at 2 pm.

The document also shows how the regime had banned “unregistered” satellite phones, which it “considered means of dealing with foreign parties that intend to damage the national security”; the owner of any such phone was to be considered “an agent of a foreign enemy”. From this phrasing, it appears that the regime was hoping to convince low-level functionaries that the Syrian revolution was the work of outsiders and provocateurs – Assad’s original scapegoat.

To reinforce Ba’athist discipline, a constant flow of state propaganda – in the form of “cultural and educational talk-shows” – is also decreed here as a method of “containing the current crisis.”

It all goes to show just how transparent Assad’s bluff was all along. If this uprising was the work of “Salafists” and “foreign agents,” why stop people from commenting on it publicly?

Perhaps now the global media, which has run with headlines straight out of Syrian cultural and educational talk-shows, will be embarrassed into taking everything Damascus says as the opposite of the truth.

The committee of planning for security of wired and wireless telecommunications and digital TV and various mail services of all levels in Syrian Arab Republic met and concluded the following:

Internet is to be completely disconnected in Daraa, Homs and the eastern provinces starting on Wednesday at 14:00

Upload packet size to be reduced in all other areas.

Issuing an announcement, via Ministry of Information through local media, informing all citizens, that owners of unregistered satellite phones are obliged to submit them to the General

Establishment of Telecommunications or any of its branches in Syria, within 10 days of the date of the announcement, because such phones are considered means of dealing with foreign parties that intend to damage the national security, and any phone to be found after the stated period means that the owner is an agent of a foreign enemy.

Discussing the mobile phone coverage that comes from neighboring countries and installing the needed apparatus in certain points at the borders to conduct the reverse procedures.

Continuing the executing of the project of one-antenna-per-building and speeding the Digital TV project by conducting the contracts /23, 24/y/9/2/2011.

Broadcasting cultural and educational talk-shows in TV and radio at times helping in containing the current crisis.

For reviewing and decision making

The Committee of Security Planning

Decision of the General Head of the National Security Office

Despite the cyber-blackout in Deraa, Homs and elsewhere, protestors have still managed to get reams of footage onto YouTube and Facebook. In the absence of foreign journalists, whom the Assad regime has also disallowed, this footage represents the only real evidence coming out of a sealed-off country in upheaval.