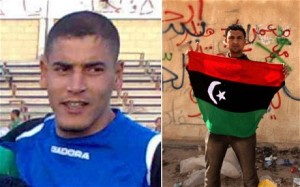 Four members of Libya’s national football ( soccer) team and 13 other leading figures in the sport have defected to the rebels.

Mr Gtat and Mr bin Issa announced the defection to the BBC during meeting in the rebel-held Nafusa Mountains in western Libya on Friday night.

It after a number of military officers also defected from Colonel Muammar Gaddafi’s forces to join the rebels.

Speaking to the BBC at his hotel room in the town of Jadu, Mr Gtat explained why he and his colleagues had chosen to join the rebels.

He said: “I am telling Colonel Gaddafi to leave us alone and allow us to create a free Libya.

“In fact I wish he would leave this life altogether,” he added with a laugh.

In North Africa, where football is hugely popular, the defections are major propaganda coup for the rebels and a blow for Colonel Gaddafi.

Mr bin Issa, added that he had chosen to come to the Western Mountains “to send a message that Libya should be unified and free”.

“I hope to wake up one morning to find that Gaddafi is no longer there,” he added.

His forces are armed with rocket launchers and tanks while the rebels are mainly armed with rifles and small machine guns.

In the Western Mountains, the rebels have managed to seize most of the high ground, taking control of a series of towns, but troops loyal to Colonel Gaddafi hold the plains and valleys below.

The Gaddafi regime also still holds the capital, its approaches, and large parts of this mainly desert country.

So far, most of the attention has of course been on the heavy fighting for coastal cities, where most of Libya’s population live.

But Col Gaddafi also has arms caches and military units deep in the Sahara Desert – some of which have not yet been deployed.