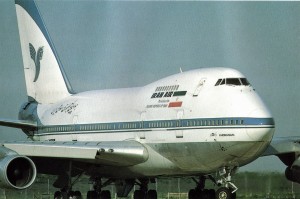 The US has imposed economic sanctions on Iran’s national airline, saying Iran Air had supported the Iranian military.

In a statement, the treasury department also said the airline had provided “material support and services” to the Iranian Revolutionary Guard.

The US accuses Iran of aiming to develop nuclear weapons. Tehran says its programme is wholly peaceful.

In addition, the US treasury department accused Iranian port company Tidewater Middle East Company of the Revolutionary Guard Corp of exporting arms and military equipment from the seven ports it operates in the country.

“Preventing Iran from developing nuclear weapons is a top US government priority and we remain deeply concerned about Iran’s nuclear intentions,” US Secretary of State Hillary Clinton and Treasury Secretary Tim Geithner said in a joint statement.

“The United States is committed to a dual-track policy of applying pressure in pursuit of constructive engagement, and a negotiated solution.”

Iran Air has faced US sanctions since 1995, preventing it from buying aircraft or spare parts from Boeing or Airbus.

The new sanctions mean no US company will be able to do business with Iran Air or Tidewater, and if the companies hold any assets in the US, those will now be frozen.

“The US and our partners remain fully committed to a diplomatic solution with Iran,” Mrs Clinton and Mr Geithner said.

“However, until Iran is prepared to engage seriously with us on such a solution, we will continue to increase pressure against Iranian entities of concern.”