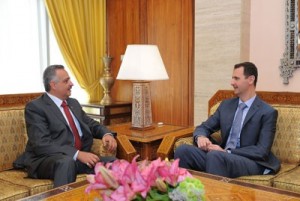 Syria’s government owned news agency SANA reported that the two discussed the newly formed cabinet and the situation in Syria.

Arslan announced his resignation during a press conference on June 13 and accused PM Nagib Mikati of lying and causing a rift between him , MP Walid Jumblatt and MP Michel Aoun.

Arslan was always insisting on being allocated a ministerial portfolio , but instead he was assigned a ministry of state . Ministries of state are usually used as a filler to complete the lineup.

Arslan who later apologized said “Mikati lied to all the Lebanese and caused rifts between many people , he thinks he is the smartest and this is something we cannot accept”. He added :” I have lost all confidence in Mikati and his abilities to seriously run the country”.

Lebanese Democratic Party media adviser Salim Hamadeh, unveiled that a decision was in the making to resolve the issue of Arslan’s resignation

Arslan’s brother-in-law, Marwan Kheireddine, will most probably replace him as minister of state, according to Hamadeh but the final decision will be up to the party .