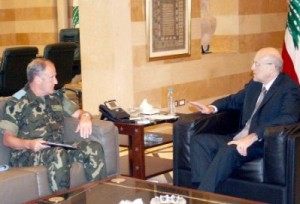 Lebanese Prime Minister Najib Mikati said on Wednesday that Lebanon is committed to having “the best relations” with the international community.

The PM was quoted by National News Agency as reiterating his cabinet’s respect for international resolutions, including UN Security Council Resolution 1701.

Mikati met with UNIFIL Commander General Alberto Asarta Cuevas, during which he voiced the importance of the peacekeeping troops’ role in South Lebanon.

He also called on the UN to exert pressure on Israel “so that the latter would stop violating Lebanese sovereignty.”

The PM added that “cooperation between UNIFIL troops and the Lebanese army in South Lebanon is what fosters stability in the region.”

The males only cabinet of 30 ministers was announced last Monday by PM Mikati after nearly five months of deliberations within the Iranian and Syrian-backed March 8 parties.

The issue of the UN resolution affecting the Special Tribunal for Lebanon (STL) is one of the most important for the opposition. Mikati did not touch on it today butt Speaker Nabih Berri told Al Jumhouria newspaper in a report published Wednesday in response to the content of the ministerial statement :

“We are also committed to UN resolutions and specially 1701 , but as far as the STL is concerned when we get to it we will pray for it”.