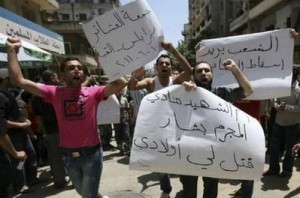 Those charged belong to both sides of the protesters, the report added but their names were not released

Many analysts questioned why the Alawite party should have a military official .

March 14 MP Hadi Hobeich said on Monday that weapons backed by Hezbollah were used in the clashes that broke out on Friday in northern Lebanon.