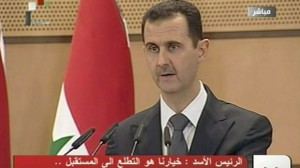 Syrian President Bashar Assad, facing international and domestic pressure for rapid change, promised to open the country’s political system and allow for a change of the constitution but unveiled no concrete new reforms and continued to blame unspecified foreign conspiracies for the violence perpetrated by his security forces in his first public address in over two months.

But the speech fell far short of Syrian and international demands for a dramatic opening up of one of the world’s most tightly controlled police states. They said the vision he outlined ultimately failed to include concrete steps toward the democracy the protesters demand.

Though Assad insisted that “conspiracy is blooming in Syria,” describing “germs” that had infected the country, activists acknowledged that the tone of the speech was less arrogant than his previous addresses and he attempted to acknowledge the country’s dire situation.

“We meet today in a defining moment in the history of our country, a moment we wish to be a turning point from a yesterday when innocent blood was shed to a tomorrow when we restore the picture of serenity, freedom, integrity and solidarity,” he said to a crowd of lawmakers who punctuated his occasionally rambling 70-minute speech with applause. “We have seen many grave hours; we have paid a grave price.”

Assad, battling for his autocratic regime’s survival in the face of a nationwide pro-democracy uprising, softened his tone from his previous two speeches — especially a disastrous March 30 address that enraged protesters — acknowledging martyrs “on both sides” and that “innocent blood was shed.” He urged thousands of refugees fleeing to Turkey to return to their homes.

Assad announced that he had entrusted the reform process to a national dialogue authority that includes himself and dozens of people from “all walks of life” that would work up a package of reforms, including a possible new constitution that could allow for the creation of political parties, in time for August parliamentary elections.

Assad also tried to convince Syrians that previously announced reforms, such as the removal of the decades-old Emergency Law and the issuance of citizenship rights to the country’s long-repressed Kurdish minority, were substantial.

The past announced reforms failed to quell the protests or rein in security forces increasingly using military hardware to halt the protests. And many predicted the speech would do nothing to end daily protests.

Syrian activists said the speech failed to acknowledge demands for democracy, and that the proposed national dialogue authority would fail to work because its members would be handpicked by the regime.

“He spoke about election law and a change in the constitution,” said Georges Chachan, a member of Syria’s Assyrian community and an opposition activist now living in Belgium. “The problem is, who are these people who will take part in the dialogue? If they are people chosen by the regime to speak in the language of the regime and to work on the timetable of the regime, then we have a problem. The people who are in the street are not the people the regime chooses to speak with. ”