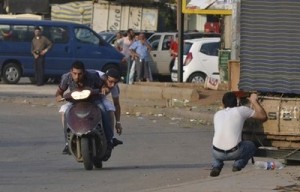 Cautious calm was restored in Tripoli LBC television reported on Saturday , adding that one of those injured during Friday’s clashes died today.

Shops are closed in the area of clashes, and the Lebanese army is heavily deployed, the report added.

The army quickly deployed to contain the situation, which spread to the area of al-Rifa in al-Qubbeh neighborhood in Tripoli.

Informed security sources told al-Jumhuriya newspaper that President Michel Suleiman ordered all security forces to “contain the situation as soon as possible,” calling for sparing no expense to provide all security reinforcements for this end.

An agreement was reached last night to halt the fighting and at 1:00 am all sides respected it and the army proceeded to deploy in the areas that witnessed the most fighting.

Prime Minister Najib Mikati came under fire for the way he handled his first crisis since he formed the cabinet .

Mikati on Friday accused the opposition of being behind the clashes that took place in Tripoli . This outraged the opposition who accused him of slander specially since he talked before the investigation of the incident started .

Top photo: Lebanese citizens duck down as they ride their scooter past a man taking cover as clashes broke out between Sunnis and Alawites after a demonstration of the anti-Syrian regime protesters , in Tripoli, northern Lebanon, on Friday June 17, 2011. The violence came four days after Lebanese Prime Minister Najib Mikati, who comes from the Tripoli neighborhood, announced a new government dominated by pro-Syrian groups, including the militant Hezbollah and its allies. (AP Photo).