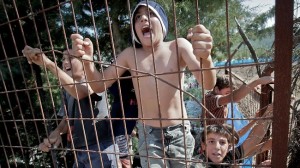 Syrians who fled to the Red Crescent tent camp in Yayladagi on the Turkish border said two women in the field hospital there had been raped.

One also had her face slashed and the other had her breasts cut off.

They said Syrian forces in the Mamal al-Suker area of the flashpoint city of Jisr al-Shughour had assaulted the women and thrown acid over the men.

One refugee said 12 women had been brutalised with a bottle in Mamal al-Suker and four of them had later had their throats slit. “They are raping the women and torturing the families,” said a refugee in the Yayladagi camp who asked to be identified only as “K”.

“Twelve women were raped and one had her breasts slit,” she said.

Turkey weighing buffer zone inside Syria The Australian, 4 hours ago

Angelina Jolie to visit Syrian refugees The Australian, 4 hours ago

Syria wants its refugees returned The Australian, 1 day ago

“I came here with my mother. I had nothing to do with what was happening. None of my family went to the protests. They were coming to our houses, raping the women and killing people. The Shabiha (government militia) can do anything.”

The refugees said advancing forces loyal to President Bashar al-Assad were pursuing a scorched-earth policy as they pressed towards the border: burning crops, killing livestock and shelling even half-built houses in an apparent attempt to drive the population out.

The bodies of two women were dumped on the road outside the border village of Khibret al-Jooz in an apparent attempt to sow fear among the hundreds of refugees who have sought safety there.

Syrian spies were suspected of infiltrating the border villages where many refugees have sheltered. Two cars that appeared to be driven by Syrian intelligence personnel filmed with mobile phones when they passed the camp in Yayladagi.

The Turkish government refuses to grant refugee status to those fleeing. A spokesman said: “The term we use is ‘Syrians who are allowed to enter Turkish territory on humanitarian grounds’ . . . The term we use is ‘temporary tent cities’.”

The refugee influx began last week after the Syrian military mounted a brutal offensive in the north of the country around Jisr al-Shughour, where the authorities claim 120 soldiers were killed by armed criminal gangs.

Syria has launched a media offensive to counter the outcry over its deadly crackdown on dissent, escorting journalists to a hub of the protests and staging a loyalist rally.

The official SANA news agency has reported that armed groups mutilated the corpses of members of security forces in Jisr al-Shughour.

Human rights activists have said those killed were unarmed protesters. Opposition activists said some soldiers mutinied after refusing to obey orders and clashed with troops loyal to the regime. Up to 8500 residents of Jisr al-Shughour and neighbouring towns and villages have since fled to Turkey.

Turkish authorities, who are erecting a fourth and fifth encampment for Syrians who cross the border, are expecting thousands more people to enter as the clampdown intensifies.

The regime is struggling to contain an uprising that has shown remarkable durability despite ruthless suppression that has claimed 1600 lives.

Initially, it appeared that brute force could snuff out the embers of revolt but protesters have continued to take to the streets across the country in the past three months, seemingly undaunted by the mounting casualty toll.

Although the opposition has yet to win over the cities of Damascus and Aleppo, where half the people lives, security forces have been unable to crush the rebellion.

“We told Davutoglu that the only things keeping us safe were him and God,” one refugee said.

The overwhelmingly Sunni Muslim refugees chanted slogans against Mr Assad’s mostly Alawite security forces and its Shia Muslim backers in Iran and Lebanese Hezbollah. One chant went: “No Iran. No Hezbollah. We want someone who believes in God.”

In Damascus, the regime mounted an orchestrated show of support, when thousands gathered to unfurl a national flag that was 1.6km long.