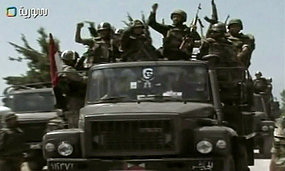 Syrian troops using tanks and helicopters are said to be pushing towards further towns and villages in the country’s north-west, having taken control of Jisr al Shughour on Sunday.

Witnesses say troops are pursuing a “scorched earth” strategy in the area, destroying houses and crops and arresting hundreds of people.

Activists say troops are also heading to the south-east where state media say rebels carried out attacks on government buildings.

The development comes as the exodus of refugees fleeing the violence in Syria continues to build.

Most of the refugees came from Jisr al Shughour, 20 kilometres from the border, where authorities say 120 security personnel were killed by gunmen 10 days ago. Some activists, however, say deserting troops and residents clashed with security forces.

The army retook the rebellious town on Sunday and appeared to be moving towards the town of Maarat al-Numaan, which straddles Syria’s main north-south highway linking the capital Damascus with the second city of Aleppo.

Othman al-Bedeiwi, a pharmacy professor in Maarat al-Numaan, told Reuters by telephone helicopters had been ferrying troops to a camp in Wadi al-Deif, several kilometres from the town.

“We met the (provincial) governor today and he assured us that the army will go in only to arrest 360 people it has on a list,” he said. “The people of Maarat, however, are sceptical.”

“My name is on the list to be arrested as being a gunman. I never carried a weapon in my life.”

More than 8,500 Syrians have sought shelter across the border to escape president Bashar al-Assad’s military drive to crush protesters demanding political change in a country ruled by the Assad dynasty for the last 41 years.

The government says the three-month-old protests are part of a violent conspiracy backed by foreign powers to sow sectarian strife. Syria has banned most foreign correspondents, making it difficult to verify accounts of events.

While, many are fleeing the country, thousands more people are living rough just inside Syria.

Dozens of refugees with mud covering their boots and clothes clambered to a Turkish village to find bread for families waiting across the border in Syria in sodden make-shift camps.

“We are desperate here. We are under the rain, our children are sick. We have no medicine and no food,” said a crying woman with a baby lying next to her.

Turkey has set up four refugee camps just inside its borders and the state-run Anatolian news agency said on Tuesday authorities might provide more. It said the number of refugees had reached 8,538, more than half of them children.

Syrian rights groups say 1,300 civilians have been killed since the start of the uprising in March. One group, the Syrian Observatory for Human Rights, says more than 300 soldiers and police have also been killed.