Syrian Army deserter: ‘We were ordered to shoot on the people’ 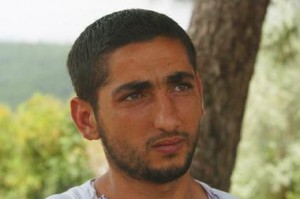 Amid the gathering human toll of Syria’s three-month rebellion, a rare interview with one deserting soldier may appear little more than a footnote.

But the saga of Darwish Mohammed Fidou helps explain why already some 1,300 Syrians have died and an estimated 10,000 have fled the violence to Turkey and Lebanon.

Mr. Fidou was part of a military unit ordered to fire on protesters in the city of Homs, who refused and then deserted, taking part in antiregime protests in the northwest town of Jisr al-Shughur.

As he escaped the violence there last week, he says he witnessed soldiers shooting at each other, an Army divided further by orders to kill demonstrators.

“My heart is broken to watch my people die, the Syrian people die, to see such a thing as this,” says Fidou. “It was the same when I had orders to shoot on the people – it broke my heart.”

Syria has effectively banned all foreign reporters from the country, making it impossible to verify Fidou’s claims.

But already 7,000 Syrians have crossed the border into Turkey in the past week, fleeing before a Syrian military advance to avenge the deaths of 120 police and security forces in Jisr al-Shughur.

The town fell with little resistance, and refugees and Turks living along the border say the offensive has spread to a string of villages around the town.

“The cows were killed, the harvest was burnt,” says a young Turkish man who gave only his first name of Ali, who has traveled with a video camera to the contested areas in recent days and witnessed the onslaught. His footage has been running on Turkish news channels.

In one house with “blood all over the walls,” says Ali, “we couldn’t breathe” because of the stench of bodies of three men, eight women, and three boys.

Syrian military helicopters spotted Ali’s group, and one member was killed – struck in the head by rounds from the helicopter – as they ran for seven hours trying to hide. He witnessed first the tanks firing upon the houses, “then the Army troops were coming and were burning everything.”

Reservist called up for duty, ordered to shoot people

It was this kind of anticivilian action that soldier Fidou, in his early 20s, refused to perpetrate. Of slight build and with a thin beard, Fidou wears tennis shoes dirty from a long journey.

In his pocket he carries a carefully folded document, proof that he completed his mandatory military service in 2008 in Jisr al-Shughur.

As a reservist he was called up in April – not long after the Syria’s uprising began against the dictatorial rule of President Bashar al-Assad.

Fidou reported for duty and says he was given 15 days training in riot control techniques. He was then deployed to Homs, where his unit was ordered to fire directly on civilians to put down unrest.

Fidou was sent into battle with a plastic riot shield and a truncheon.

“The first day they didn’t tell us anything, just that there are gangs out there, trying to kill people,” says Fidou. “When we went to the streets, we were surprised to find only people with olive branches.”

Commanders “were ordering us to shoot at the people, and if we didn’t shoot we would be killed,” recounts Fidou. Snipers were placed to shoot at possible deserters.

In the melee, Fidou and a number of other soldiers who refused to kill ran from the scene, eventually being taken in and hidden by families who knew they would not shoot.

“They were begging us: ‘Don’t kill anybody!” he recounts.

‘I saw snipers and soldiers shooting at each other’

Afterward they fearfully regrouped and returned to their barracks, while those who had actually fired upon the crowds “went back crying with regret.”

The treason of Fidou and some others went undetected.

“Our commanders were cheering: ‘You are the heroes!” recalls Fidou. The soldiers shouted back, nervous to do anything less than expected: “Bashar al-Assad will protect you!”

Fidou had had enough, however, and paid a bribe for a slip of paper – which he still keeps in his pocket – that allowed him to temporarily exit the base on May 15. Leaving everything behind, he fled, eventually passing through Jisr al-Shughur, where he joined anti-regime protesters.

When the shooting started, he didn’t stick around but headed with many others for the safety of the mountains and his home village of Khirbet al-Jouz. Looking back, “I saw tanks shooting, and snipers and soldiers shooting at each other,” recalls Fidou.

His story bolsters opposition claims that the high death toll of 120 police and security forces, which Syrian state-run media claimed were killed in an “ambush” by “armed gangs” last weekend, actually was the result of increasing dissent within Syrian units.

The result was the vow by Damascus to deliver a “decisive” military blow against Jisr al-Shughur, and across this part of northwest Syria, to avenge those deaths.

Officer’s warning: Military will take everything, kill the men

Heavy early summer rains poured today on the thousands of Syrians who refugees say are waiting just inside the border with Syria, still undecided about whether they will join the 7,000 already in Turkey.

And what else does the future hold, as the Syrian Army moves to reclaim its rebellious northwest? Fidou says an officer sent a message a few days ago to his home village, just over the next hill, in view of a Turkish overlook tower.

It was a warning that the Syrian military will soon arrive, and “take everything and kill the men.”

Today, says Fidou, there is no one left in the village.

Photo: Syrian army deserter Darwish Mohammed Fidou arrives seeking sanctuary in the border town of Guvecci, Turkey, on June 13. Mr. Fidou says he deserted from the Syrian army after his unit was ordered to fire upon unarmed anti-regime protesters in mid-May in the Syrian city of Homs. He now joins a building refugee exodus of 7,000 that has arrived in Turkey in the past week.