More than 10,000 Syrians have fled the violent repression

More than 10,000 Syrians have fled the violent repression of opposition led by President Bashar al-Assad and his brother, Maher, the United Nations said. 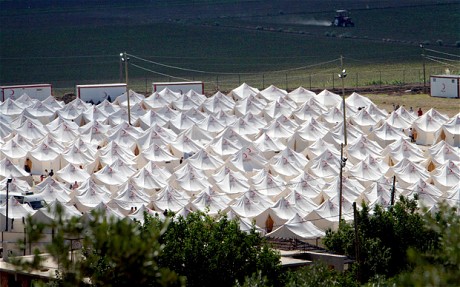 But many more are playing a dangerous cat-and-mouse game with the armies on both sides of the border as they seek refuge as well as food and supplies for their families.

Reports from the town of Jisr al-Shughour, which was recaptured by Syrian forces on Sunday, said 16 bodies had been found during the course of the day.

That suggested that government claims of the city having been taken over by “armed gangs” who fought a vicious rearguard action against the advancing army were an exaggeration.

Opposition spokesmen said hundreds of unarmed local men were rounded up and arrested during the operation, and those who tried to flee shot.

“Jisr is finished, it is razed,” said one man, Abu Ali, as he left the town.

“Assad’s men are killing anyone within the military, police or others who don’t obey their orders blindly.”

Those who did not make it over the border were camping out on the Syrian side last night. The Daily Telegraph was escorted by scores of these men who were desperate to retain a foothold in Syria but too scared to go to their homes. They used smugglers paths back into Syria in an attempt to avoid official refugee camps.

Clutching white carrier bags stuffed with freshly baked loaves of bread and cheese, soft drinks and crisps that they had obtained in the Turkish border village of Guvecci, old men and boys as young as seven wound their way back into Syria walking and jogging in single file.

“We want our freedom and we want peace!” added an old man wearing a red and white headscarf.

They know that once they officially cross into Turkey they will be corralled inside the camps, and will lose their chance to return home should the opportunity arise.

The refugees come not just from Jisr al-Shughour. A young man who said he came from the Syrian coastal town of Latakia described how he had taken part in an anti-government protest and been arrested and beaten by the police.

“They are savages,” he said.

Their big fear is that after they have swept through Jisr al-Shughour and neighbouring villages, the troops will head for their encampments.

One activist group said government snipers had killed at least 10 people in the village of Ariha in the past two days.

The question then may be the response of the Turkish army, which occasionally attempts to stop the crossing and re-crossing of the border.

Currently the only troops monitoring the border area, there is speculation that they will soon create a formal buffer zone.

Britain said yesterday that Turkey, which had been developing close ties with Syria before the three-month-old uprising, had agreed to support a resolution condemning the violence at the United Nations security council.

A spokesman for David Cameron, said he had been assured of Turkey’s backing when he rang his opposite number, Recep Tayyip Erdogan, to congratulate him on his victory in Sunday’s general election.