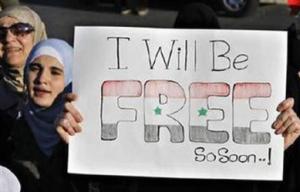 The US defence secretary, Robert Gates, has become the latest Obama administration official to suggest President Bashar al-Assad has lost the legitimacy to rule Syria. But a more pressing question for the international community as it contemplates the regime’s ever more vicious and shambolic efforts to crush the pro-democracy uprising is whether Assad has lost the plot.

It’s impossible to know for sure what is happening on the ground in Syria. But recent events have thrown up several clues as to the regime’s worsening predicament, its widening internal divisions and its overall lack of a clear strategy.

One is persistent reports that the army – which regime spokeswoman Reem Haddad calls “Syria’s backbone” – is divided against itself.

Take the following account, published in the Turkish newspaper, Hurriyet, of last week’s violence in the north-east town of Jisr al-Shughour that left 120 security personnel dead. “It was not the protesters who killed the soldiers; it was the [army] commanders who killed them. Then most of the soldiers ran away with the protesters,” a security officer told the paper.

“We received a phone call from the centre and they ordered us to shoot and kill all the protesters,” said Ahmad Gavi, 21, a defecting Syrian soldier in a separate account. “Five soldiers who refused to follow this order were killed immediately in front of me. Then commanders and some soldiers started to shoot each other. There were 180 soldiers at the security check post and 120 of them were killed.”

Such accounts of mutiny and defections recall similar stories told in other towns, including Homs and Daraa in the south. Writing in Foreign Policy, Syria expert and author Robin Yassin-Kassab noted that, despite the fact that most anti-regime demonstrations remained non-violent, soldiers were undoubtedly being killed.

“Firm evidence is lost in the fog, but there are reliable and consistent reports, backed by YouTube videos, of mutinous soldiers being shot by security forces,” Yassin-Kassab said.

The fact that Assad has not been seen in public for weeks, that his army commander brother, Maher, is leading the offensives in the north, and the fact that the president seems to be hiding from the world – Ban Ki-moon, the UN secretary general, says he is refusing to take his calls – all suggests Assad may not only have lost the initiative but has also lost control of the reins of power.

It was the supposed “reformer” Assad, after all, who in April proposed lifting Syria’s emergency law and opening a dialogue with the regime’s critics, only to see the army launch a nationwide crackdown within days. Since then, there have been instances when Friday prayer demonstrations were tolerated, then suddenly brutally dispersed, and then tolerated the following week, apparently depending on which army or police commander was in charge that day. But, overall, the hardliners are in the driving seat.

As Syria’s refugee and humanitarian crisis mounts and its economy and ability to trade suffer, the regime is visibly floundering and making matters significantly worse through its many random, undirected and often illegal actions. This cannot continue indefinitely.

Two disturbing scenarios are now coming into closer focus. One is the prospect of civil war, possibly along sectarian lines. The other is the possibility of direct Turkish intervention in a country with which Ankara has a long history of disputes over territory, water and other matters.

Turkey’s prime minister, Recep Tayyip Erdogan, a key but very recent ally, is increasingly publicly critical, decrying the “savagery” and “inhumane” behaviour of the Syrian armed forces. He is said to be angry that promises made to him personally by Assad at the onset of the protests have been broken. And he is facing a growing refugee crisis on Turkish territory at a sensitive political moment.

Yassin-Kassab said: “Turkish military intervention remains unlikely but if the estimated 4,000 refugees who have crossed the border thus far swell to a greater flood, particularly if Kurds begin crossing in large numbers, Turkey may decide to create a safe haven in north or north-eastern Syria. 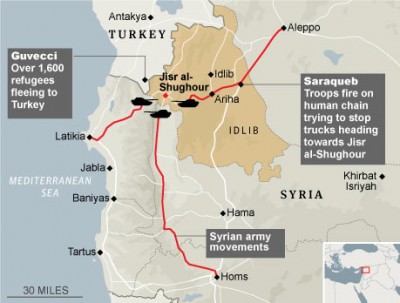 “This territory could become Syria’s Benghazi, potentially a home for a more local and credible opposition than the exile-dominated one that recently met in Antalya, Turkey, and a destination to which soldiers and their families could defect. A council of defected officers might then organise attacks on the regime from the safe haven.”

If that happened, then Turkey, a Nato member, would be entitled to request help from the US and other alliance members. Which is how, despite all assurances to the contrary, Britain could yet end up at war in Syria.