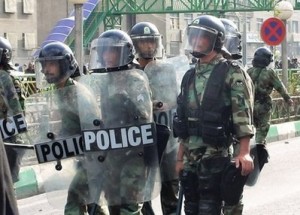 “Security forces attacked the crowd with electric batons … in the Vali-e Asr street to disperse the demonstrators,” Sahamnews said.

Witnesses said thousands of security personnel were deployed in Tehran to stop any revival of anti-government protests that followed President Mahmoud Ahmadinejad’s controversial re-election in 2009.

Opposition websites had called for a “silent rally” to mark the vote, which reformists say was rigged to secure the hardline president’s win. Authorities say the election was the most legitimate since Iran’s 1979 Islamic revolution.

Sahamnews also said supporters of the opposition gathered in other parts of the city.

“Shopkeepers were ordered to close down their shops … hundreds of people have gathered in other areas of Tehran,” the website said.