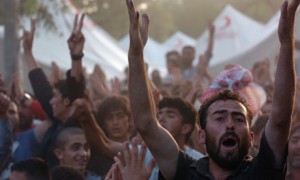 Hikmat was one of the few remaining residents in Jisr al-Shughour when the Syrian army rolled in, firing wildly and at will. “They didn’t care what they were shooting at,” said the 39-year-old, who was hit in the foot as soldiers finally delivered on a week-long threat to wreak havoc in the town that dared rage against the regime.

Jisr al-Shughour has now been sealed off by some 15,000 troops – backed by tanks and helicopters – who are operating with impunity.

Hours after being wounded, Hikmat fled for the Turkish border. “There was a good man with a motorcycle who gave me a ride,” he said. “We had to travel at night because the roads were still not safe.” He said he passed “many, many” people from the town of more than 40,000 who had fled to the rolling hills between Jisr al-Shughour and the safety of the Turkish border. “They are too scared to move. They are terrified.”

Those who have crossed the frontier are shedding increasing light on three days of bloodshed that have changed the face of the Syrian revolt. Until now there have been few voices able to speak out about what was left behind in Jisr al-Shughour or the events leading up to last weekend’s carnage.

The Syrian information ministry said that the bloodbath had been caused by armed gangs, which attacked the military and killed 120. Interviews conducted in recent days, however, have painted a very different picture. They tell of a crackdown far more brutal than any other seen since the first uprising three months ago, although protests have been met with ever-increasing force by President Bashar al-Assad.

Last Sunday, Samir, 27, had just returned from a funeral for a local man, Bassil Musri, who was killed the day before by security forces. “We were gathered in a large garden at the centre of town,” he said. “I was the first one shot. They had taken positions in every government building surrounding us.”

Samir’s body was riddled with bullets, which have taken a terrible toll. He is bleeding internally and is racked with infection. He may not survive the coming days. “The gunfire was from everywhere,” he said, lying in a hospital bed in Antakya in Turkey. “So many people fell. It was a massacre.”

Samir said trouble had been brewing for days. Strangers in town had been gathering information on demonstrators – especially those the regime had flagged as agents provocateurs. “We had been campaigning for freedom, for our rights, just like everyone else. They say we had weapons. Believe me, if we had I would have been the first to use one.”

In the same hospital, Abu Tahar, 29, an ambulance driver from Jisr al-Shughour, was being treated for gunshot wounds to his back. He had arrived at the garden last Sunday to help the wounded. “Bullets were raining from everywhere,” he said. “It was chaos.” He said that up to 10,000 people had gathered in the garden, one of the few large public places in town, to protest at the killing of Musri.

“They just kept shooting and shooting,” he said. “Earlier in the week we had been told not to go to pick up the wounded. They wanted them to die there. Anyone who tried was shot, his body falling on top of the other victim. That is what happened to me. The next thing I knew I woke up here.”

He said he had spoken by telephone to family members in the town who confirmed that in the hours after the shooting in the garden large numbers of security forces had abandoned their posts – and had been shot at by soldiers loyal to the regime. He said some 14 soldiers had returned to their homes earlier in the week after refusing to carry out orders, a rarity in Syria, which had led officials to send in spies to monitor citizens and extra forces to deal harshly with any further dissent.

Samir said he had been among a group that had captured two men who had been acting as government informants. “One of them had a beard – and none of the Syrian army has beards. He didn’t speak a word of Arabic.” Samir’s account matches those of six other Jisr al-Shughour citizens who last week all spoke of foreigners – perhaps Iranians – who were standing alongside Syrian soldiers during the clashes. Britain has accused Iran of sending members of its Revolutionary Guards corps to help Damascus monitor the protests, but until last week said it had not seen evidence of troops on the ground.

The presence of Iranian troops would raise the stakes in a revolution that is steadily drawing in neighbouring states. Turkey said it is now dealing with 4,300 refugees and expecting many more. Lebanon, too, is facing an influx of people fleeing eastern Syria. Israel is also bracing for more attempts to infiltrate the Golan Heights, which it seized in 1967. Israel and the US insist that Damascus is trying to create a series of deadly diversions along the Golan in a bid to divert attention from its own woes.

Abu Tahar said the violence a week ago rekindled family memories that his father had long ago buried – two massacres ordered by Bashar al-Assad’s father, Hafez, in the early 1980s, one of which also targeted Jisr al-Shughour. “My father always said forget about it, never speak about this.” Abu Tahar added: “He said we could not get involved in politics because it would kill us all. We know the nature of our regime. Every day for the past month I knew they were coming for us. They have done what we feared they would do. The difference is that the world now knows. They will kill us all if they can. There are many people still in the mountains too scared to move. This is a crisis and they need help.”