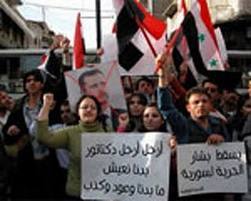 Hezbollah denied on Friday media reports that some of its members were involved and killed in the Friday violence that spread across Syria.

According to a statement issued by Hezbollah, the party said that “such rumors incite sectarian divisions.”

“Such rumors come as part of the same conspiracy that is targeting Syria and the resistance forces,” the statement said adding ” some rumors went as far as making up the names of our martyrs in Syria

including naming their hometowns”.

“We are confident that Syria, people and army, are capable of overcoming this crisis God willing .”

Syrian protesters shouted in many of the rallies staged after Friday prayers across the country of 20 million “Long live Syria, “No to Assad,” and also “No to Iran, No to Hezbollah!”