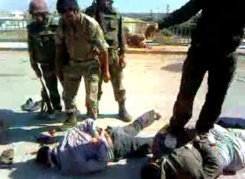 Syria plunged deeper into chaos Friday as security forces continued to open fire on peaceful pro-democracy protesters, and refugees fled into the countryside and across the border to Turkey.

At least 48 people were reported to have been killed, according to pro-democracy activists, as government forces sought to quell protests in dozens of Syrian cities and towns, including Damascus, the capital.

In opposition strongholds such as Jisr Shughur near the Turkish border and the western city of Homs, security forces fired shells from tanks and heavy-caliber weapons mounted on armored personnel carriers, said witnesses reached by telephone.

“It is unacceptable,” said an activist in Homs, who asked that his name not be used for his own protection. “I ask the Arab army of Syria to take a good look at what’s going on. They want to kill off their own people? Our army is supposed to protect us. Even animals have never been treated this brutally.” 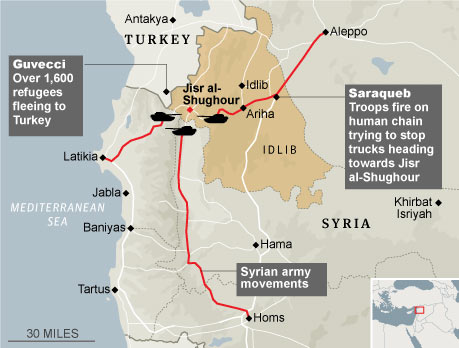 In amateur video posted on the Internet and said to be from Homs, Syrian soldiers can be seen kicking and stomping a blindfolded victim who is crying for help and wailing in pain.

“This is for asking for freedom,” says a soldier as he beats a victim.

At least two other videos were broadcast on Al Jazeera satellite news channel Friday showing soldiers in what appears to be the Syrian countryside brutally kicking a blindfolded man in the back until he falls to the ground.

Other videos showed huge marches by pro-democracy activists, some carrying Syrian flags and waving banners. “When the day comes and the people demand freedom, then their fate is to be free,” read one banner in the northeastern city of Amouda, quoting a well-known Arab proverb that has become a motto of the uprising.

“As soon as Friday prayers ended, gangs loyal to the regime surrounded the mosques and beat everyone with the intention of attending the protests,” said a witness.

But despite the lack of restraint by Syrian security forces, protests appear to be gaining strength, with witnesses reporting large numbers of people even in cities that were recently under military siege.

“We are not afraid anymore,” said an activist reached in the eastern city of Dair Alzour who spoke on condition that he not be named. “This is our right. We have the right to demand democracy. If we can’t live a life where we can ask for basic human rights then what good is this life?”

Meanwhile, a burgeoning refugee crisis continued to grow in southeastern Turkey, where at least 3,000 Syrians fled across the border in recent days to makeshift tent cities set up by relief agencies and the Ankara government. According to witnesses reached by telephone, security forces fired heavy tank shells into rural residential areas in and around the nearby Syrian town of Jisr Shughur.

Security forces also targeted ambulances transporting the dead and injured, said one witness. Activists provided the names of at least seven young men who were kidnapped from the town.

“We know from reliable sources that hundreds are dead, and thousands more either injured, detained or confined to their homes,” said Hicham Hassan, spokesman for the International Committee of the Red Cross.

According to Hassan, Syrian authorities were preventing the ICRC from delivering aid to many distressed areas.

At least 5,000 people, including children and the elderly, have settled on the Turkish border and set up tents, according to one witness.

One Jisr Shughur native who had made it to the Turkish border left behind a clothing store, his only source of income, to bring his wife and child to safety.

“If they kill someone in Jisr Shughur, they bury him with others in mass graves,” he said.

According to a Turkish doctor treating refugees, Syrians afraid to take relatives to Syrian hospitals were bringing them to the border to receive medical attention in Turkey.

“In the name of humanity, we are sending ambulances to pick them up and bring them here,” the doctor said. “Then we put them back in the ambulances and take them to the camp to recover,” he said, speaking on condition of anonymity because the Turkish government had requested that its citizens not make public statements about the situation.

Two Red Crescent trucks seen at the camp were preparing to build a clinic at the border, in order to immediately care for the injured.

According to the doctor, more than 100 people who needed medical care had suffered gunshot wounds and many of them were in intensive care. The most heart-wrenching case the doctor had to deal with was that of a 90-year-old woman who was in a coma because of a gunshot wound.

“We’re almost the same people,” he said, describing longstanding bonds connecting southeastern Turkey to Syrians across the border. “May God help these people!”