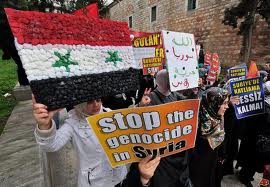 The White House significantly toughened its stance on Syria on Friday, calling for an “immediate end to brutality and violence” and warning President Bashar al-Assad was leading his nation on a “dangerous path.”

“The United States strongly condemns the Syrian government’s outrageous use of violence across Syria today and particularly in the northwestern region,” Carney said.

“There must be an immediate end to the brutality and violence.”

The statement contained a clear sign of Washington’s growing impatience over Syria after top officials had repeatedly called for Assad to embrace reform or get out of the way – but stopped short of demanding his departure.

“Earlier this week, we urged the Syrian government to exercise maximum restraint and not to respond to its own reported losses through additional civilian casualties,” Carney said.

“The Syrian government is leading Syria on a dangerous path.

“For that reason, it is critical that all Syrians remain united, work to prevent sectarian conflict, and pursue their aspirations peacefully,” he continued, raising the prospect of an even deeper abyss of violence and division in Syria.

“We stand by the Syrian people who have shown their courage in demanding dignity and the transition to democracy that they deserve.”

He also cited the “appalling violence” of shootings, assaults and arrests of demonstrators at the hands of Syrian security forces in explaining why the United States has thrown its weight behind a UN Security Council resolution proposed by Britain and France that condemns Syria for its crackdown.

Earlier, as the situation in Syria deteriorated, officials at the United Nations said Assad was refusing to take telephone calls from Secretary General Ban Ki-moon.

The US ambassador in Damascus, Robert Ford, has also seen his requests for meetings with Syrian government officials repeatedly denied.

In Washington, as the latest drama in the Middle East and North Africa escalated after a spring of revolt, the State Department noted that international pressure was beginning to build on Assad.

“We will continue to look at ways we can up the pressure on him. What’s important here is that we make it clear to him that there’s growing pressure against his actions,” said Mark Toner, a State Department spokesman.

Protesters poured into the streets of major cities and towns across Syria after Friday prayers, calling on Assad to step down and expressing solidarity with the residents of Jisr al-Shughur.

Syria has mounted a fierce response to weeks of protests modeled on the uprisings in Egypt and Tunisia that ousted long-ruling dictators and inspired region-wide revolt.

On Thursday, Assad came under fire from Turkish Prime Minister Recep Tayyip Erdogan, a personal friend and longtime ally, who described the treatment of the bodies of women slain by Syrian security forces as an “atrocity.”

Erdogan said the brutal crackdown was “unacceptable” and would “necessarily” lead the UN Security Council to step in.

But Russia, one of five veto-wielding members of the council, opposes any resolution on Syria.