Syria suffered a fresh blow to its international reputation on Thursday when the UN nuclear watchdog voted to refer Damascus to the UN Security Council over allegations that it covertly built a nuclear reactor within its borders. 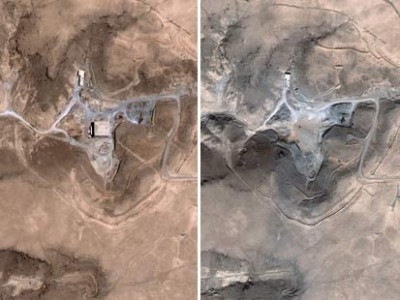 But while the vote by the board of governors of the International Atomic Energy Agency reflected strong western concern over Syria’s nuclear programme, Russia and China voted against the call for the council to debate censuring the Syrian regime.

The 35-nation IAEA board voted in favour of referring Syria to the Security Council, with 17 nations in favour and six – including Russia and China – against. Diplomats said that 11 countries abstained from the vote and one country was absent.

“Because of the Russian and Chinese votes, we can be quite sure that the [Security Council] in New York will refrain from censuring Syria because both those countries will veto such a move,” said a diplomat at the IAEA. “However, the US has managed to persuade the board to express concern over Syria’s reluctance to come clean over how it built such a reactor.”

Israel destroyed the desert site of the alleged reactor – near Deir Alzour in the country’s remote north-east – by bombing it in September 2007. US intelligence reports have said the facility was a nascent North Korean-designed reactor intended to produce plutonium for atomic bombs. Syria denies the charge, saying it was a conventional military site.

The IAEA gave independent backing to the US allegation in a report last month that said it was “very likely” to have been a reactor.

The IAEA began investigating the allegations in June 2008, but Syria has refused to co-operate with its investigation. Thursday’s motion was proposed by the US and its western allies, who had asked the IAEA’s governing body to find Syria in “non-compliance” with its international obligations.

Russia’s vote at the IAEA came as its diplomats strongly indicated their opposition to another vote on Syria at the UN – this time over its suppression of the uprising against Bashar al-Assad’s regime.

“Russia is against any UN Security Council resolution on Syria,” Alexander Lukashevich, Russian foreign ministry spokesman, told journalists at a briefing in Moscow.

“We do not believe the Syrian issue is a subject for consideration by the Security Council, let alone the adoption of some kind of resolution,” he said. “The situation in this country, in our view, does not present a threat to international peace and security.”

Britain, France, Germany and Portugal have floated a new resolution condemning Syria at the UN Security Council as the US and its allies seek to raise the pressure on Syria to end its violent crackdown on anti-government protesters. A vote is expected at the UN on either Friday or Monday.