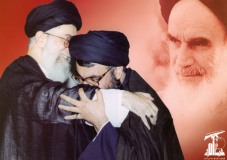 Hezbollah Secretary General Sayyed Hassan Nasrallah  made  a TV appearance  on Monday via video link  during the opening of a conference on Iranian supreme leader Ayatollah Ali Khamenei.

He praised   the Palestinians and Syrians who protested along the Israeli-Syrian border in the Golan Heights as well as in the West Bank.

Israeli troops opened fire on Sunday as protestors from Syria stormed a ceasefire line in the occupied Golan Heights. Syria said that 23 protestors were killed in the clash.

“What happened Sunday  on the borders of the West Bank and Golan uncovered the US’ will to confiscate the region’s revolutions and  confirmed Washington’s absolute commitment to Israel’s security.”

“This is the same Washington that talks to us about human rights and liberties,” he said

“Sunday’s Naksa Day clashes at the Golan Heights are further evidence of the American administration’s agenda to  steal Arab wealth. He said without elaborating on the “wealth” part

“Imam Khamenei believes that Israel will be destroyed and that this will happen soon,” Nasrallah stressed.

“The developments in Palestine assert the people’s strong will and this generation of youth demonstrates a powerful motivation to return to its homeland,”  Nasrallah added

The Resistance’s victory against Israel in the July 2006 war confirms Khamenei’s prediction, “which is a sign of the courage of this leader,” said the Hezbollah chief

“The decision to launch the July 2006 war was an international one, which enjoyed Arab support and was executed by Israel. I received a message from Khamenei saying that by leaving our fate in God’s hands, we will inevitably be victorious,” he concluded.

He was referring to the Hezbollah war with Israel  which devastated the whole country. Over 1200 Lebanese were killed mostly civilians , the Lebanese infrastructure was devastated , over 1 million became homeless , mostly Shiites from the south and over 120, 000 housing units were destroyed mostly of Shiite residents in south Lebanon and southern Beirut suburbs …the damages were estimated by UN at over $15 billion.

As soon as the 2006 war started Nasrallah appeared on TV and announced that Iran will pay for rebuilding whatever is destroyed in the war with” Halal” money.

But the Halal money never showed up. Instead of putting pressure on Iran to deliver on its promises Hezbollah and its allies occupied downtown Beirut and tried to overthrow the government for not paying quickly enough for rebuilding the south. They forced the Lebanese government which is heavily indebted to borrow more money to help rebuild what was destroyed during the 34 day war . If it wasn’t for Saudi Arabia help many houses in south Lebanon would never have been rebuilt according to financial analysts.