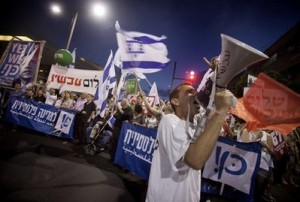 Thousands of Israelis on Saturday marked the 44th anniversary of the Six-Day War by demonstrating in Tel Aviv against the continued occupation of Palestinian territories captured in the conflict.

The predominantly Jewish crowd marched through the centre of Tel Aviv calling for the creation of a “Palestinian state in the interests of Israel” along the borders prior to the Six-Day War, which began on June 5, 1967.

Protesters carried a placard featuring a caricature of Prime Minister Benjamin Netanyahu cast as the Pied Piper of Hamlin and bearing the slogan “Netanyahu, you are leading us into catastrophe.”

Waving Palestinian and Israeli flags, the protesters chanted: “Israel, Palestine: two states for two peoples” and “Solidarity with the Palestinians.”

The demonstration, which was authorised by the police and protected by security services, was organised by a grouping of left-wing, anti-occupation movements including leftist Zionist party Meretz, Marxist non-Zionist Hadash and anti-colonisation group Peace Now.

On the West Bank, Christians organised a religious service for “peace and justice” at a military checkpoint near Bethlehem, which also denounced the continuing occupation.

The Israeli military was put on alert Friday before Palestinian demonstrations planned for Saturday’s 44th anniversary of the “Naksa,” or the defeat of Arab armies by Israel during the Six-Day War.

Israel also deployed reinforcements to its northern border with Lebanon, and to the Golan Heights where the ceasefire line with Syria is drawn, as well as to the West Bank and Gaza Strip.