A US missile attack on a Pakistani village near the Afghan border killed Ilyas Kashmiri, a top al- Qaeda commander, both his organization and a Pakistani security official said. 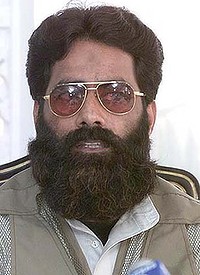 “Our commander Mohammed Ilyas Kashmiri was martyred in an American drone attack,” Kashmiri’s Islamic militant guerrilla faction, Harkat-ul Jihad Islami, said in an e-mailed statement yesterday. The death was also confirmed by a Pakistani security official in South Waziristan, who could not be identified by name in accord with government policy.

The drone strike occurred at about 11 p.m. on June 3 in the village of Ghawa Khawa, about 20 kilometres south of the South Waziristan district center. The missiles struck outside a home where a group of Islamic militant fighters, including Taliban, were meeting, said a Ghawa Khawa resident. “I saw Taliban fighters come to get the bodies of those killed,” said the resident, speaking on condition he not be named, citing concerns with his personal safety.

Kashmiri’s death deprives al-Qaeda of a key operational commander just one month after US. Navy commandos killed the group’s overall leader, Osama bin Laden, also in Pakistan. In recent years, Kashmiri has “risen to the top tier of al-Qaeda’s leadership cadre as an experienced and dangerous military commander who directs attacks in South Asia while also aiding terror attacks against the West,” according to Bill Roggio, who directs the Long War Journal, a U.S.-based Website that monitors US counter-terrorism campaigns.

Kashmiri, born in 1964 according to the US government, rose to command a Pakistan-based affiliate of al-Qaeda called Harkat-ul Jihad Islami, or the Islamic Jihad Movement, that has focused its attacks on India, citing India’s control over part of the disputed territory of Kashmir. He later broadened his focus to include US and other Western targets.

A 2009 grand jury in Chicago indicted Kashmiri for allegedly conspiring to bomb a Danish newspaper that had published cartoons of the prophet Muhammad, the founder of Islam.

The US State Department says Kashmiri and his movement were responsible for a March 2006 car bomb attack on the US Consulate in Karachi, Pakistan’s largest city, that killed diplomat David Foy and three others. The US last year designated Kashmiri a terrorist and offered a US$5 million reward for information that might lead to his capture.

The village attacked with the missiles is under the control of a local Taliban commander named Mullah Nazir. Nazir signed a 2009 truce with Pakistan’s army under which the military has abstained from attacking his forces while he agreed to avoid hosting al-Qaeda leaders.

Still, according to Roggio, “more senior al-Qaeda leaders have been killed in Nazir’s tribal areas during the US air campaign than in those of any other Taliban leader in Pakistan.”

Pakistani news media reported in 2009 that Kashmiri had been killed in a US missile strike in North Waziristan, news that Kashmiri denied in an interview with Pakistani journalist Saleem Shahzad. Shahzad, a specialist on Islamic militant movements was killed this past week after what he had told colleagues were warnings from Pakistan’s Inter-Services Intelligence Directorate.

Kashmiri’s killing comes a month after US commandos killed al-Qaeda leader bin Laden at his home in the Pakistani town of Abbottabad, 50 kilometres north of the capital, Islamabad.