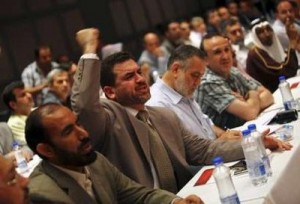 Syrian opposition groups called Thursday for President Bashar al-Assad’s immediate resignation, in a joint declaration at the end of a two-day meeting in Turkey.

The statement, read out in the Mediterranean resort of Antalya, urged the “immediate resignation of President Bashar al-Assad from all functions he occupies.”

It urged the holding of “parliamentary and presidential elections within a period that will not exceed one year” following Assad’s resignation.

The dissidents vowed “to do whatever it is up to them to bring down the regime” in Syria, welcoming the declaration with applause.

In a message to the international community, which has been piling up pressure on Damascus for political reform, the declaration voiced opposition to “any foreign intervention” in Syria such as in Libya.

“Everything must be done to preserve Syria’s unity and territorial integrity,” it said.

Some 300 Syrian activists, mostly exiles, representing a broad spectrum of political forces opposed to Assad’s regime, attended the talks, the largest gathering of the opposition so far.

The participants, among them members of the banned Muslim Brotherhood, have snubbed a general amnesty for political prisoners, decreed by Assad Tuesday, as a belated and inadequate move.

Organisers of the gathering — titled “Conference for Change in Syria” — have said their purpose is to draw up a “roadmap” for a peaceful and democratic transition in their country.

They have set up several committees to coordinate anti-regime action, notably to explore ways of supporting protesters in Syria, both in financial and logistic terms, in areas such as legal assistance and strengthening Internet media backing the revolt. Click here to read the complete articleAFP

Photo: Abdulraheem Yahia Bahro (2nd L), an opponent of the Syrian regime, shouts slogans during a conference in Antalya, southern Turkey, June 2, 2011. Syrian President Bashar al-Assad must step down to pave the way for democracy after an uprising against his rule showed he had lost legitimacy, the country’s opposition in exile said on Wednesday. The gathering is the first official meeting of activists and opposition figures in exile since protests erupted 10 weeks ago in Deraa, a poor, agricultural city in the southern Hauran Plain.