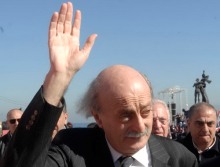 Kuwaiti newspaper al Anbaa quoted observers as saying that the recent statements by PSP leader MP Walid Jumblatt indicate that he is in the process of another U turn.

Although the new U Turn may not be in the direction of March 14 it will be a move away from March 8.

The observers revealed that Jumblatt has accelerated the process of his new U-turn after returning from Qatar.

Jumblatt , who was elected by March 14 voters during the 2009 elections officially defected to the Iranian and Syrian backed Hezbollah led alliance last January, making them the new majority.

Lebanon has been run by a caretaker government since last January. Nagib Mikati was appointed in January as the PM designate with the backing of the Hezbollah led-March 8 alliance, MPs Jumblatt and Mohammad Safadi . March 14 leaders have repeatedly said that intimidation from Hezbollah’s weapons helped secure the parliamentary majority for Mikati’s nomination.

A dispute over the Interior Ministry portfolio between President Michel Suleiman and MP Michel Aoun was blamed for the delay in the formation of a new cabinet headed by Mikati.

According to analysts Hezbollah is hiding behind Aoun’s demands for the ministries of Interior , Communications and justice in order to have full control of Lebanon’s security when STL indictments are issued and made public

Jumblatt was quoted last Friday in the Al-Akhbar newspaper as saying that Hezbollah “does not want to form a new cabinet,” and that Hezbollah is using Change and Reform bloc leader MP Michel Aoun as a façade to delay cabinet formation”. Jumblatt confirmed that the quote was accurate.