The International Atomic Energy Agency (IAEA) has concluded in a confidential report that a Syrian site destroyed in the September 2007 Israeli bombing was “very likely” a nuclear reactor about which Damascus had failed to inform the UN nuclear watchdog, news reports citing a leaked copy of the document said Wednesday. 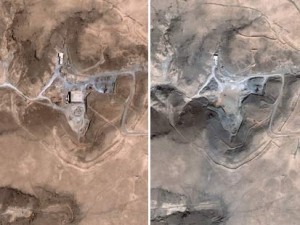 “Considering all information available to the agency, the agency concludes that the destroyed building was very likely a nuclear reactor and should have been declared by Syria,” the IAEA said in its confidential report, a copy of which was published by Bloomberg News.

The alleged al-Kibar nuclear reactor, located near Deir Alzour in Syria’s remote north-east, was destroyed in the bombing. The IAEA has since been investigating claims by the U.S. intelligence agencies that the targeted building was in fact a nuclear reactor being built with North Korean help.

U.S. intelligence agencies claim the site resembled to Yongbyon reactor in North Korea and say that the facility could produce weapon-grade nuclear material if it was not destroyed in the Israeli air raid.

Syria, however, has rejected the U.S. allegations, insisting that the building destroyed in the Israeli air strike was an unused military facility under construction. Damascus also stresses that it is not pursuing a clandestine development program as alleged by Western countries.

Although Syria had allowed IAEA inspectors to take samples from the site of the suspected nuclear reactor in June 2008, it later blocked them from making follow-up visits to the site. Damascus also denied IAEA inspectors access to several buildings which it suspects to be associated with Syria’s secret nuclear program.

The UN nuclear watchdog has since said it found traces of unnatural uranium at the site of the suspected reactor. But Syria maintains that the traces of uranium found were residue from missiles used to destroy the site by the Israelis.

Being a signatory of the Nuclear Non-Proliferation Treaty (NPT), Syria has the right to enrich its own fuel for civil nuclear power under IAEA inspection. But, the safeguards agreement Damascus has signed with the IAEA requires it to inform the UN nuclear watchdog about any plans to build a new nuclear facility.

Although the IAEA had said in an earlier report that the destroyed Syrian site had the characteristics of a nuclear reactor, it did not rule out the possibility that the site was being used for non-nuclear purposes when it was destroyed in the bombing.

The latest development comes amidst a popular uprising in Syria against the rule of President Bashar al-Assad. Rights groups estimate that more than 850 people have been killed and over 8,000 others detained in police crackdowns since the pro-democracy protests began on March 15.

Despite the strong measures employed by the government to quell the unrest, protests still continue in towns and cities across the country. They have also prompted the European Union and the United States to impose sanctions, including travel bans and asset freezes, on senior Syrian officials.

The ongoing unrest is seen as the most serious challenge to al-Assad’s rule in Syria since he came to power eleven years ago, succeeding his father Hafez al-Assad who ruled the Arab country for three decades. The latest IAEA report is bound to mount international pressure on his administration.