at least 1,100 people killed in Syria 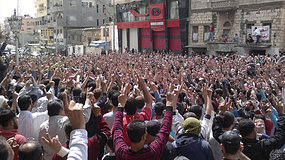 Human rights activists in Syria say the two-month crackdown by security forces on anti-government protesters has cost the lives of at least 1,100 people.

The Syrian human rights organisation Sawasiah says it has the names of 1,100 people reportedly killed during the unrest that broke out in mid-March.

Most were from southern areas in Hauran Plain – including the city of Deraa where the protests first began two months ago.

The human rights group says it in fact has heard reports of another 200 civilian deaths but has no names to base the figures on.

The death toll in Syria rose sharply after the protests spread from Deraa to other parts of the country.

Syrian authorities continue to blame the deaths on armed terrorist groups – backed by Islamists or foreigners who they say have killed more than 120 soldiers and police.

Meanwhile, a top UN official says the UN mission to evaluate humanitarian conditions in Deraa has not been allowed to enter the country.

“We have not managed to get an access for the mission,” said emergency relief coordinator Valerie Amos.

“We will continue to push for access – it’s very important that we have a sense of what is going on.”

Mr Ban also urged Mr Assad to cooperate with a UN Human Rights Council inquiry into the clampdown on protests.

But the UN team has yet to be allowed entry.

According to Ms Amos, Syrian officials say “this is a domestic situation which the Syrian authorities feel that they have themselves the capacity to deal with”. Reuters