Siniora’s wife was hit by a motorcycle in Beirut 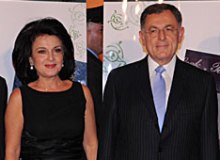 Hoda Siniora wife of former Lebanese Prim minister and current Future bloc leader MP Fouad Siniora , was hit on Tuesday by a motorcycle in the street of Verdun in Beirut across from 732 Center.

Mrs Siniora suffered several injuries and bruises and was transported to the American University Hospital for treatment. She is still at the hospital undergoing various tests .

“The motorcycle driver escaped to an unknown location,” according to local reports and investigation was launched .