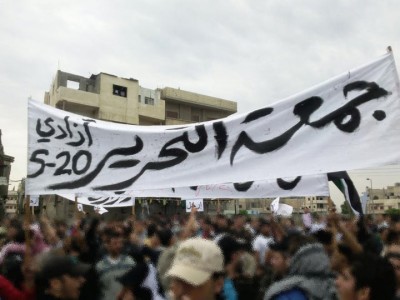 Syrian government statements that it had defeated the revolution with its brutal crack down were premature. This Friday, Syrians came out to demonstrate across the country despite the growing danger of violence. The absolute numbers of demonstrators may not have been very great, but the number of demonstrations was. As Phil Sands in Damascus reports: “A ring of suburbs around the capital all staged demonstrations yesterday – the first time they have done so on the same day.”

Obama’s speech, no doubt, gave courage to the demonstrators. But it seems clear that the culture of revolution that has spread among the young generation of Syrians will not be uprooted or destroyed by fear or firepower. As I wrote on May 11:

The Syrian opposition has successfully established a culture of resistance that is widespread in Syria and will not be eliminated. Even if demonstrations can be shut down for the time being, the opposition will not be defeated. Syria’s youth, long apolitical and apathetic, is now politicized, mobilized, and passionate.

The government is not succeeded in suppressing the demonstrations even for one Friday. Greater numbers of middle class Syrians are becoming increasingly horrified by the growing brutality. The “shoot-first, ask-questions-later” policy of the government has engendered deep anger. Instead of stopping the revolution, government force has allowed the opposition to mobilize the Western world to its cause.

The Obama administration seems to have accepted the notion that it must prepare for a post-Assad Syria.

The Syrian opposition has yet to offer up any leadership or unified program for the future. Before Western governments can move more aggressively to support the cause of the opposition, they will have to know who the opposition is. The opposition must develop executive institutions and a program. It is high time that political parties form and set forward their visions of Syria’s future.

Here is what Ammar Abdalhamid is saying. He is absolutely right:

“The lack of any obvious opposition alternative to Assad limits what Western governments, including the U.S, can do, says Ammar Abdulhamid, a prominent U.S-based Syrian dissident. “We do want [Obama] to call on Assad to step down at one point soon, but that’s not going to happen until Syrian opposition and activists get together and formulate a viable alternative to manage the transitional period. Only then can we expect world leaders to be more forthcoming in their calls on Assad to step down.”

Anthony Shadid in the NYTimes says the same: Promise of Arab Uprisings Is Threatened by Divisions

“…But in the past weeks, the specter of divisions — religion in Egypt, fundamentalism in Tunisia, sect in Syria and Bahrain, clan in Libya — has threatened uprisings that once seemed to promise to resolve questions that have vexed the Arab world since the colonialism era. …