At least 926 people killed in Syria since March 15 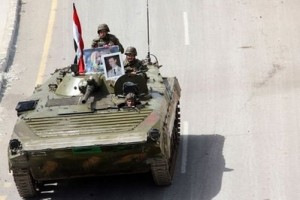 Activists upped the death toll for the latest round of political unrest in the country to 76, most of them gunned down by ruler Bashar Assad’s security forces.

Politically charged funeral marches were held Sunday by residents of the districts of Khaldiyah and Bayada of Homs, Syria’s largest city to mourn those killed a day earlier, according to an account by activists.

The Facebook group, The Syrian Revolution 2011, which boasts more than 180,000 followers and which has emerged as the organizing force behind the demonstrations that have been demanding “freedom” in Syria has called for daily freedom protests.

The group posted this poster on its Facebook page . It called for “Azadi ” Freedom in Kurdish” protests . Freedom … Azadi today and every day…the people want to bring down the regime”

Thousands of Syrians fled to Lebanon. United Nations High Commissioner for Refugees UNHCR reported on Friday that over 1400 Syrians crossed into Lebanon during the past week alone . Syrians fleeing a deadly government crackdown have been finding sanctuary in north Lebanon, taking advantage of family ties .

The group reported that the People of the Palaces neighborhood ( Hay al Qusour ) of Homs protested today . There were also protests in Douma a suburb of Damascus that started after the evening prayer, Latakia, Deir el Zour, Daraa and other cities.

In Lattakia, the demonstrators were chanting in solidarity with the people of Tall Kalakh, the Lebanese border city that has been under fire by Assad’s security forces.

The group also reported that ” four high ranking Syrian officers have defected from the Syrian army. They were able to make it safely out of the country Saturday – and some of those officers were Alawites.” In reference to the religious sect that president Assad belongs to .

According to activist Najati Taiara, prisoners at a jail in Homs smuggled out a distress call about the circumstances under which they were being held. Several hundreds prisoners have allegedly been stuffed into a basement storage room of about 1,000 square feet flooded with wastewater from a leaking pipe. Most of them were detained for protesting against the Assad clan’s decades-long rule.

Gunfire rattled the city all day Saturday, according to witnesses cited by activists. “Security forces not only fired directly on the mourners of yesterday’s martyrs, but also they fired and targeted deliberately and flagrantly the cars that tried to transport the injured,” said a statement issued by activists.

In the city of Saqba, protests that began Friday continued into Saturday. The city was surrounded by security forces that opened fire on protesters.

Injured people are being treated in private homes for fear of being snatched by security forces at government hospitals, activists say.

A witness spotted armored vehicles and buses ferrying troops to the western city of Zabadani, where activists suspected the regime would strike next.

Security forces on the outskirts of the city of Dara raided the village Ghabagheb at dawn, arresting dozens.

Activists continue to uncover evidence of the regime’s alleged atrocities in Dara. At least 28 people from a village close to the southern city have been missing since April 29, when they tried to break the siege on Dara.

The bodies of nine people arrived at Dara National Hospital, all bearing signs of torture. One of them was identified as Tamer Subhi Qadah, 27, of the village of Kahel, who died after suffering a fractured skull following his arrest on April 27.