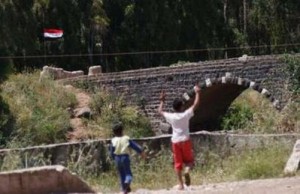 ” Four high ranking Syrian officers have defected from the Syrian army. They were able to make it safely out of the country Saturday – and some of those officers were Alawites.” The Facebook group, The Syrian Revolution 2011 reported on Sunday

Syrian Revolution 2011 which boasts more than 183,000 followers has emerged as the organizing force behind the demonstrations that have been demanding “freedom” in Syria

Photo: A Syrian refugee child flashes victory signs at the northern Lebanese village of Wadi Khaled near the Lebanese-Syrian border, as a Syrian flag flutters on the Syrian side of the border May 22, 2011. Syrians who fled for their lives from a security crackdown in the border town of Tall Kalakh say violence has hardened attitudes towards Syria’s President Bashar al-Assad and unrest will not end until he steps down. Reuters