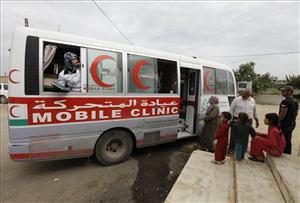 Syrian security forces opened fire on protests around the country Friday in the latest sign the conflict could be moving toward a long and bloody stalemate as President Bashar Assad shrugs off tighter sanctions and U.S. calls to step aside. Activists said at least nine people were killed.

The clashes indicate neither side appears able to tip the scales in the two-month uprising. Assad’s forces have waged a relentless crackdown on the opposition, but protesters continue to face down security forces with marches seeking to break the Syrian leader’s authoritarian rule.

Human rights groups say more than 850 people have been killed in the clashes and clampdowns.

Witnesses reported protests Friday in the central cities of Homs and Hama, as wells the Mediterranean ports of Banias and Latakia.

In Banias, one witness said security forces dispersed protesters with gunfire and sticks. Several people were wounded from beatings, including a woman who was taking video of the march, he said.

Like most witnesses contacted by The Associated Press, he asked that his name not be used in fear of reprisals from the government.

Last week, mass arrests and heavy security kept crowds below previous levels seen during the uprising, suggesting Assad’s sweeping campaign of intimidation was working. But the marches Friday suggested that opposition forces could be trying to regroup.

Friday’s death toll was reported Friday by one of the Local Coordination Committees in Syria, which help organize the protests. The groups said at least seven people were killed in Homs, one in the Damascus suburb of Daraya and one in the village of Sanamein in southern Syria.

Syria is coming under increasing pressure to end the crackdown, but the government has brushed off the criticism and new U.S. sanctions that have targeted Assad and senior aides.

In an address Thursday on the Arab world uprising, U.S. President Barack Obama said that Assad should lead his country to democracy or “get out of the way.”

Photo: Syrian citizen, right, who fled from the violence in western Syria, receive medical aid from a Lebanese Islamic civil society group, in the Wadi Khaled area, about one kilometer (0.6 miles) from the Lebanon-Syria border