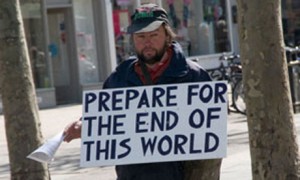 On Saturday at 6pm, something cataclysmic is set to happen – the world is going to experience “Rapture”. That at least is what Harold Camping, an evangelical broadcaster based in California, has been telling everyone. At the appointed hour, we’re informed, all true Christians will be snatched away and rapturously transported to heaven. Everyone else – presumably the followers of other religions and people like Richard Dawkins – will be left to suffer the prolonged agony of “tribulation” until the final destruction of the universe, which is set to take place on 21 October.

There are two tantalising psychological issues surrounding the predictions made by doomsday cults. One is why people become entranced by the idea of the end of times, and the other is how they make sense after the event, when the predictions of salvation and catastrophe have failed to materialise. A number of theories have been put forward to explain the periodic rise and fall of eschatological beliefs, the most persuasive being the notion that they are fostered by pervasive feelings of insecurity.

The first proper attempt to explain how people deal with discredited doomsday predictions was described by Leon Festinger and his colleagues in their book, When Prophecy Fails. In 1954 the authors gained access to a Michigan cult who believed that there would be a great flood on 21 December, leading to the destruction of everyone except the true believers, who would be whisked to safety in a flying saucer. Festinger and his colleagues interviewed members of the cult before and after the appointed day. They discovered that instead of abandoning their beliefs when the flood and the flying saucer failed to materialise, most cult members actually consolidated their beliefs and increased their attachment to the group. They explained this in terms of “cognitive dissonance” – the psychological discomfort that people experience when their beliefs come into conflict.

There have been other occasions when failed predictions have consolidated members’ attachment to their group. When the Church of the True Word prophesied nuclear disaster in the early 60s, 100 followers hid in underground shelters for several weeks, only to emerge with their beliefs strengthened, not weakened, by the experience.

Intuitively, you’d expect to find that messianic leaders who get their predictions wrong are likely to become discredited and to be abandoned by their followers. But that’s not necessarily what happens. Instead, it’s been suggested that because followers need to reduce their feelings of dissonance, they may actually consolidate their initial beliefs and redouble their efforts to persuade other people of their validity.

In the wake of a failed prophecy, a leader can always deny that he ever made that prediction or insist that he said something else. In some instances these denials may be premeditated, while in others they may arise from genuine distortions of memory – including what psychologists call “hindsight bias”. Believers may even insist that the prophecy has happened, not in our world, but in some spiritual sphere.

Alternatively, failed prophecies may conveniently be postponed to a later date. For example, the Millerites, a north American religious group, predicted that the Second Coming would take place in 1833, but when nothing happened they rescheduled the event for 1844. This deferred solution is similar to the one used by Camping, who initially predicted that the Rapture would occur during September 1994. When nothing happened he explained it away as an error in his calculations.

Although leaders of doomsday cults occasionally profit from their errors, as Camping appears to have done, there are recorded cases where botched predictions have actually reduced the appeal of religious movements. To be on the safe side, leaders like Camping should heed the advice of Casey Stengel, the baseball legend, who insisted that we should “never make predictions, especially about the future”. Guardian