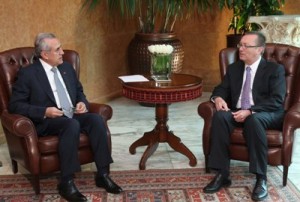 Speaker Nabih Berri, who met the Syrian ambassador Friday afternoon did not meet Feltman. His office said that”the speaker did not refuse to meet with Feltman but he is out of town !!!”

The Iranian envoy arrived in Beirut on Thursday

In his meetings with the Lebanese officials Feltman reportedly reconfirmed that the United States considers the make-up of Lebanon’s government to be a strictly Lebanese issue and called on all parties in Lebanon to protect the government formation process from any external interference.

Feltman also reiterated the U.S.’s view that the international community will assess its relationship with any new government of Lebanon based on the make-up of the new cabinet, its ministerial statement and the actions it will take with regard to the Special Tribunal for Lebanon and Lebanon’s other international obligations.

Feltman is reportedly in Lebanon to deliver a message that the United States views the revolutions in the Middle East and North Africa as an historic opportunity to meet the aspirations of the people of the region, building a stronger foundation for prosperity, and showing people the fruits of democratic change.

Lebanese President Michel Suleiman stressed after meeting with Feltman the importance of establishing stability in the Middle East and encouraging the implementation of reform in these countries and urged the US to play a serious role in the area and to push for a comprehensive and just peace in the Middle East.

Feltman who arrived in Lebanon when President Barack Obama was delivering his speech on US policies in Middle East and Africa outlined the U.S.’s position and its unwavering support for a set of core principles: opposition to the use of violence and repression; protection for universal rights including free speech, peaceful assembly, freedom of religion, equality for men and women; and support for political and economic change in the Middle East and North Africa that can meet the legitimate aspirations of people throughout the region.

During his meetings Feltman expressed the United States’ serious concern about the ongoing violence in Syria and called for an end to the Syrian government’s continued use of violence and intimidation against the Syrian people seeking to express their political aspirations.

In his Middle East policy speech on Thursday , President Obama said the Syrian President faces the choice of either leading a democratic transition in his country or getting out of the way.

More than 850 protesters have reportedly been killed and thousands have been jailed since the uprising began according to human rights groups.

Feltman called on the Lebanese government to work with the U.N. High Commissioner for Refugees and other international organizations, including the International Committee of the Red Cross to help the Syrians who fled the violence to Lebanon in accordance with international laws. 1400 Syrians crossed to Lebanon during the past week according to UNHCR

Feltman also reiterated the United States’ concern about events on Lebanon’s border with Israel on ‘Nakba day’ May 15, emphasizing the importance of maintaining strong border security to prevent incidents that increase tensions that can lead to casualties and negatively impact the security of the region. 11 people were reportedly killed by the Israeli forces and 112 were wounded in Maroun al Ras border town.