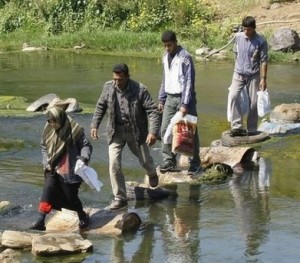 United Nations High Commissioner for Refugees UNHCR issued the following press release in which it summarized the actions it has taken in cooperation with the Lebanese government with regards to the Syrian refugees in Lebanon. Over 1400 Syrians have crossed into Lebanon during the past week

This is a summary of what was said by UNHCR spokesperson Andrej Mahecic – to whom quoted text may be attributed – at the press briefing, on 20 May 2011, at the Palais des Nations in Geneva.

UNHCR and partners are working with the Lebanese government in the border areas of Wadi Khaled and Tall Bire in northern Lebanon to help families who have fled the violence in Syria in recent weeks.

According to local Lebanese leaders some 1,400 people have crossed into the Wadi Khaled and Tall Biri regions over the past week from the Syrian town of Tall Kalakh. This is in addition to those that have crossed since late April. Local authorities estimate that around 4,000 Syrians have crossed to Lebanon recently. The exact numbers are difficult to confirm.

Last week, care-taker Prime Minister Saad Hariri called on the government’s High Relief Committee to supervise and coordinate the response to the humanitarian needs of those displaced in the north. The pro-active role taken by the Lebanese authorities to ensure that new arrivals are assisted is encouraging.

Many of those who have crossed the border recently have come without any belongings; having fled what they say was heavy military bombardment of Tall Kalakh and surrounding areas. Most have found shelter with relatives or host families, and some are residing temporarily in a school in Tall Biri.

UNHCR has participated in a number of distributions of mattresses, blankets and food kits to assist the new arrivals. To date this includes some 3500 mattresses and 1600 blankets as well as over 500 food packages – each package can feed a family of four for a month.

Most of the people who have crossed the border in recent weeks are women and children. In addition to their immediate need for food, shelter and medical help, they also need psycho-social support. The latter is being addressed by the Ministry of Social Affairs. UNHCR is supporting these efforts and has established a field presence in the north, working closely with the ministry to assess and provide needed protection interventions.

UNHCR is following up directly with the government concerning reports of individuals being detained for illegal stay/entry and some being returned to Syria.

Photo: Syrians walk across barrels and tires laid as a makeshift bridge as they cross the Naher al-Kabir river in northern Lebanon from Syria. Exhausted, terrified and penniless, Syrians fleeing a deadly government crackdown have been finding sanctuary in north Lebanon, taking advantage of family ties that straddle the normally porous border. AFP