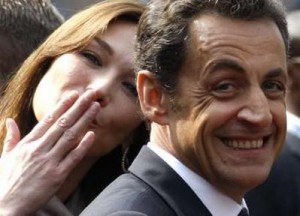 French President Nicolas Sarkozy’s father was quoted by a German newspaper on Tuesday as saying that first lady Carla Bruni is expecting a child, apparently confirming the subject of weeks of speculation.

Talk has swirled in France that the former supermodel is pregnant ever since she clutched a shawl to her stomach during a newspaper interview in early May and fended off inquiries with the words “my lips are sealed to protect something…”.

Bruni, 43, wore a loose shirt and jacket during an appearance on French TF1 television on Monday, and when the presenter cryptically told her he would not ask about her personal life but would like to congratulate her, she giggled and congratulated him back.

“The two do not want to know the gender in advance, but I’m sure it will be a girl and as beautiful as Carla,” the mass-selling Bild newspaper quoted Pal Sarkozy as saying.

Sarkozy’s office said it did not comment on his private life.

With the normally very slender Bruni looking heavier around the middle, some French media have speculated that she could even be expecting twins.

Guests at a recent dinner with Bruni’s mother Marisa Bruni Tedeschi in Italy said that she had hinted that a new baby was on the way, according to La Stampa newspaper on Monday.

Sarkozy, the most unpopular French leader in decades and facing a tough battle for reelection a year from now, could enjoy a lift to his ratings from a presidential birth.

A series of recent opinion polls have suggested he could be knocked out in the first round of the April 2012 election by coming in third behind a Socialist Party candidate and National Front leader Marine Le Pen.

His chances of re-election looked brighter this week after the man seen with the best chance of winning the presidency, IMF chief Dominique Strauss-Kahn, was arrested in New York and charged with attempting to rape a hotel maid.

Bruni’s porcelain skin, slender frame and feline gaze turned her into one of the world’s most successful models in the 1990s.

As her modelling career waned, she turned her hand to music as a singer-songwriter. She has recorded three albums and this week said she would postpone the release of her latest album from September until next year.

Italian-born Bruni has a son from a former relationship but has often said she would like to have a child with Sarkozy. Sarkozy has three sons.

The couple married following a whirlwind romance after he won the 2007 election and his former wife Cecilia left him. Reuters