US set to hit the debt ceiling today

The U.S. government is expected to hit the $14.294 trillion debt ceiling Monday, setting in motion an uncertain, 11-week political scramble to avoid a default.

The Treasury Department plans to announce Monday it will stop issuing and reinvesting government securities in certain government pension plans, part of a series of steps designed to delay a default until Aug. 2.

The Treasury’s moves buy time for the White House and congressional leaders to reach a deficit-reduction agreement that could clear the way for enough lawmakers to vote to raise the amount of money Congress allows the nation to borrow.

Gene Sperling, director of the National Economic Council, said reaching the debt ceiling “should be a warning bell to the political system that it’s time to get serious about preserving our full faith and credit.” The Obama administration says a default would tip the U.S. back into a financial crisis.

But the pathway to a deal remains unclear, even to those doing the negotiating. The White House and Republicans are giving conflicting signals about how close they are to a deal. Vice President Joe Biden said last week the contours of an agreement were taking shape. House Speaker John Boehner painted a different picture Sunday, saying on CBS’s Face the Nation “I’m not seeing any real action.”

Many Republicans and some Democrats have said they won’t vote to increase the debt ceiling without an accompanying deal to cut spending or tackle such longer-term fiscal problems as health-care costs. They argue the debt ceiling is a good venue to force changes needed to help secure the nation’s solvency.

People familiar with the negotiations led by Mr. Biden say they are looking at cuts to agriculture subsidies and federal retirement programs, stepped-up antifraud efforts, increased premiums for pension plans backed by the Pension Benefit Guaranty Corporation and the sale of wireless spectrum and government properties.

The talks are at an early stage and potential areas of agreement are preliminary, officials warn. But Democrats have not ruled out some thorny issues, according to people familiar with the negotiations, including reforms to the pension program for federal workers.

The areas being examined amount to a sliver of the $4 trillion goal officials have set for deficit reduction over the next 10 years.

And taxes remain a roadblock. Republican leaders say tax increases can’t be part of any deficit plan, but White House officials have said any plan must include revenue increases.

Mr. Sperling said the White House wants an agreement “weeks in advance as opposed to being in stalemate in late July where everything is coming down to the wire.” Mr. Boehner appeared to agree, saying Sunday a deal doesn’t “have to wait until the eleventh hour.”

A group of House Republicans has questioned the validity of the August deadline, suggesting the Treasury could sell assets, such as gold reserves, to keep paying creditors. Treasury officials have rejected the idea, but could be forced to rethink if talks stall.

The U.S. government has hit the debt ceiling before, most notably in 1995 and 1996 when the Clinton administration and House Republicans squared off over government spending. Eventually, though, lawmakers reached deals and the country hasn’t defaulted on its debt in modern history.

Bankers and business executives warned lawmakers last week that default could trigger a financial crisis, sending interest rates soaring, which would make it harder for families and businesses to borrow. That’s because a default would throw into question the value of U.S. Treasury securities, long considered one of the world’s safest investments. Many loans and business deals are based on the value of Treasurys, and if their value eroded the impact would be felt broadly.

Because the government is projected to run a $1.5 trillion deficit this year, it must borrow money to cover its obligations, ranging from military spending to interest on existing debt.

Lawmakers have not felt pressure to act yet in part because markets have remained stable, and the yield for U.S. government debt remains low.

Yields on 10-year Treasury notes have fallen from more than 3.7% in early February—when Fed officials and others began warning of catastrophic consequences if the debt limit was breached—to below 3.2%.

If investors had serious concerns about a default, they likely would be selling bonds, which would in turn push up their yields. Bond yields have instead been moving down in part because the economy seems to be slowing. Commodities prices also have tumbled, which holds down inflation and puts downward pressure on bond yields.

If officials get too close to Aug. 2, government officials might have to decide which of the country’s creditors to pay and which payments they will suspend or stop.

Treasury officials so far have deflected questions about which creditors would be given priority. Treasury Secretary Timothy Geithner said in a letter to Sen. Michael Bennet (D., Colo.) last week that failing to raise the debt ceiling would lead to a default on obligations “such as payments to our service members, citizens, investors, and businesses.” 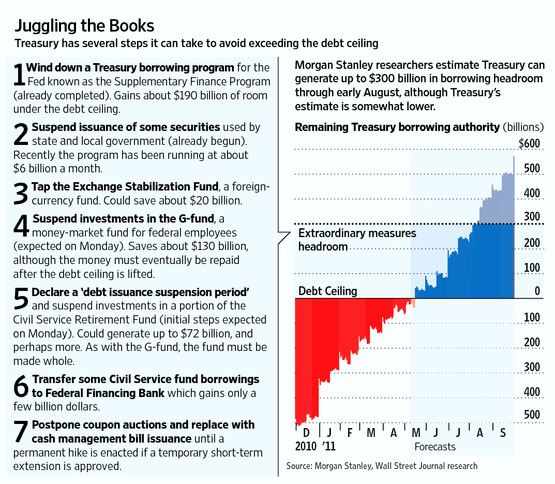