At least 7 protesters killed by Syrian army in Tall Kalakh 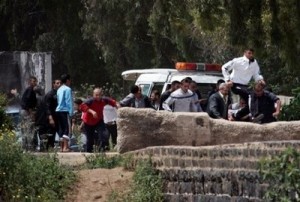 At least seven people were killed on Sunday as the Syrian army pounded the town of Tall Kalakh, near the borders with Lebanon, an activist told AFP on condition of anonymity.

“At least seven people, including two women, were killed by security forces who are indiscriminately shelling four districts in the town,” the activist said on the telephone, quoting witnesses.

He said there were probably more casualties but that so far the names of the seven who were killed had been confirmed.

The toll included three people reported to have been killed in Tall Kalakh earlier by a local resident who told AFP the army had deployed heavily in the town and that there were many injured who could not be evacuated.

Hundreds of people have fled Tall Kalakh in recent days amid a brutal crackdown by authorities bidding to crush an unprecedented revolt against the regime of Syrian President Bashar al-Assad.