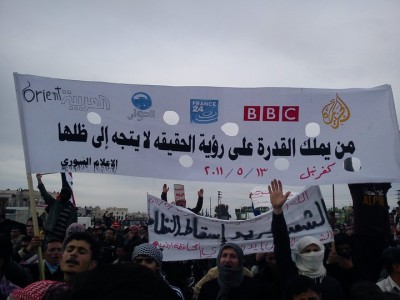 A leading human rights activist said three people were killed in Homs, two in Damascus and one in a village outside Daraa, the southern city where the revolt began two months ago. He asked that his name not be used for fear of government reprisal.

“At first they opened fire in the air, but the people continued on their way, and then they shot directly into the crowd,” an eyewitness said by telephone from Homs.

He said security forces dressed in black along with shadowy, pro-regime gunmen known as “shabiha” were doing the shooting.

Human rights groups say more than 775 people have been killed since the start of the protest movement in mid-March. The violence has become a deadly cycle each week, with protesters taking to the streets every Friday only to be met with bullets, tear gas and batons, with funerals a day later.

On Friday, despite the crackdown, thousands of people shouting “The people want to topple the regime!” returned to the streets to demand an end to Assad’s regime. Video posted online also showed protesters in some areas chanting: “We don’t like you!” and “Bye bye, Bashar.”

Soldiers occupied mosques and blocked off major public areas to head off protests, but demonstrations erupted anyway in several major areas — including cities where the government response has been particularly severe, such as Homs and Hama.

The rallies also spread to new areas of the capital, suggesting opposition to the 40-year Assad dynasty remains unbowed despite one of the most violent crackdowns of the Arab Spring.

Still, the turnout appeared to be lower than in previous weeks — something that protesters attributed to the widespread deployment of soldiers and security forces who prevented people from leaving their homes, even to attend Friday prayers.

“The army has transformed major mosques in the city into military barracks where soldiers sleep, eat and drink,” said a resident in the coastal town of Banias, where some of the biggest protests have erupted in recent weeks.

“They’ve put up barriers and sandbags around the mosques,” he said.

Up to 1,200 security forces have been deployed in the public square in the center of town, and soldiers and armed thugs have broken into shops, offices and homes to intimidate people, the resident added.

“It is tragic in every sense of the word,” he said.

Three rallies were held Friday in Damascus — the largest number of protests held at one time there. The Damascus protests are significant because they hit the seat of Assad’s power.

In Damascus’ Qaboun neighborhood, a witness said worshippers who came out of the Abu Bakr al-Siddiq mosque clashed with about 50 pro-Assad demonstrators who were being covered by a Syrian TV station. He said plainclothes gunmen in a jeep with covered license plates then opened fire on the anti-government protesters, killing and wounding several of them. Activists said two were killed and several others were wounded.

“Despite everything, protests are taking place in new neighborhoods,” he said.

Louay Hussein, a Syrian writer and political activist, said it was “an important political milestone when protests start happening in Damascus neighborhoods as opposed to the suburbs.”

He said authorities appeared to be stepping away from the policy of “systematic shooting” of recent weeks, which he added had failed to yield results and triggered international condemnation.

Other protests were around the northeastern city of Qamishli, where about 5,000 people marched in the streets chanting “Freedom!” and “Freedom to political prisoners!” said rights activist Mustafa Osso.

Assad’s regime has blamed the unrest on terrorist, extremist groups and foreign agitators. Information Minister Adnan Mahmoud told reporters Friday that a “comprehensive national dialogue in all provinces” will start within days, but he gave no further details.

Assad has come under scathing criticism for the crackdown, with the United States and Europe imposing sanctions. On Friday, Britain summoned Syria’s ambassador Friday to warn that new sanctions will target the regime’s hierarchy if Assad does not halt the violent crackdown on protesters.

There is a media blackout in Syria, making it impossible to confirm witness accounts independently. Witnesses spoke on condition of anonymity out of fear for their personal safety.

The government’s bloody crackdown has increased in intensity in recent days and weeks. The army shelled residential areas in central and southern Syria on Wednesday, killing 19 people, a human rights group said.

The government also laid siege to several towns, including Daraa, sparking fears of a humanitarian crisis. A U.N. international aid assessment team has not been allowed to enter Daraa to check on the situation.

Mahmoud, the information minister, brushed aside those concerns Friday.