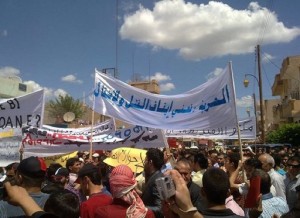 The fighting took place in Hama, a western city where the government suppressed an uprising by Sunni Muslims in 1982, and there were also demonstrations in the western city of Homs.

Protesters have taken to the streets every Friday recently after the weekly Muslim prayers, and security forces were deployed in force to greet the turnouts. A U.N. official says that as many as 850 people may have died since protests began in mid-March, but there were no immediate reports of casualties on Friday.

Activists have labeled this “The Friday of Free Syrian Women,” a commemoration of those females rallying for freedom and a remembrance of those who have been slain.

“This is history,” said activist Wissam Tarif, executive director of the human rights group Insan. “This is a new Middle East, those are the people, the young people of the country standing up saying, ‘We want to live with dignity, we want freedom and we want prosperity and we can do it. ‘”

“We have the capacity and we have the knowledge and we can do it. And we have an obstacle: the obstacles are oppression, are the regimes and the Syrian people are now standing up and saying it.”

In Hama, thousands of demonstrators rallied for the end of the Bashar al-Assad regime and chanted anti-government slogans, two witnesses said.

Security forces responded by firing tear gas at the crowds while the protesters threw stones at the forces.

One of the witnesses said demonstrators tore down a large picture of al-Assad on a government building, and security forces beat protesters with sticks.

The Baathist government of Hafez al-Assad, Bashar’s late father who once ruled Syria, crushed a revolt in Hama decades ago against the Sunnis, who are the majority religious group in Syria.

Estimates put the death toll anywhere between 10,000 and 30,000 people, though the exact number was never known.

The government has been dominated by the al-Assad family’s Alawite community, a minority religious group that’s an offshoot of Shiite Islam.

The memory of the fierce government action in 1982 is alive among protesters defying the regime.

One eyewitness in Homs, a retired teacher and a political activist, said a few thousand people demonstrated in the Bab Sebaa neighborhood after Friday prayers. He said security fired into the air to disperse protesters. He also saw a smaller demonstration in the Bab Amr district.

Videos of purported marches in Idlib, Homs, and Daraa also surfaced on Friday.

The government has been clamping down on street demonstrations over the past two months in Daraa, Homs, Banias and other cities, and deadly clashes have erupted during anti-government protests, in which citizens have denounced the lack of political freedom.

The regime has blamed armed groups for the violence and has reported the deaths of security personnel. But the demonstrators, emboldened by the tough crackdown and the mass anti-government rallies in other Arab nations this year, have blamed the killings on the government.

The number killed in clashes with government forces has been put by various human rights groups at between 700 and 850, according to Rupert Colville, a spokesman for the U.N. Office of the High Commissioner for Human Rights.

Colville said thousands of arrests have been reported, including the detentions of many Syrian opposition leaders and activists. Two activists, Najati Tayara and Rayzan Zaytouni, were arrested this week.

“We cannot verify these numbers for sure, but believe they are likely to be close to reality,” Colville told reporters during a briefing in Geneva, Switzerland.

Syria said many people have been arrested in what it calls “riots.”

On Friday, the state-run Syrian Arab News Agency quoted an Interior Ministry official as saying that more than 5,077 people had turned themselves in to authorities and were freed “after pledging not to repeat any act(s) that harm security of the homeland and citizens.”

The ministry had earlier urged those “who were misled into participating in or committing unlawful acts punishable by law to turn themselves in” before Friday and “inform about saboteurs and terrorists and the whereabouts of weapons.”

Those who do “will be exempted from punishment and the legal consequences and prosecutions,” the report said.

The Syrian regime has drawn international condemnation for its fierce reaction to peaceful demonstrations.

The U.N. human rights agency expressed concern over the shelling of the Bab Amr district in Homs.

“We urge the government to exercise utmost restraint, cease the use of force and of mass arrests to silence opponents,” Colville said.

The agency is seeking the regime’s cooperation in a fact-finding mission “to assess the situation on the ground” and noted that U.N. Secretary-General Ban Ki-moon called President al-Assad and urged him to cooperate with the effort.

Britain on Friday called in the Syrian ambassador to Britain and expressed “profound concern” about “violent repression” of the citizenry, the Foreign Office said.

Adams called on the authorities “to respect universal human rights, including freedom of expression” and “expressed concern about the continued denial of access of international media.”

“Sir Geoffrey said that unless the Syrian government stopped the killing of protestors and released political prisoners, the UK along with its EU partners would take further measures to hold the regime to account. These measures would include further sanctions targeted at the highest levels of the regime, including travel bans and asset freezing,” the Foreign Office said.

Bashar al-Assad was viewed by many as a moderate solution to his father when he took control of the country 11 years ago, but many citizens believe the proper changes haven’t emerged.

The younger Al-Assad has lifted the country’s 48-year-old state of emergency and abolished the state security court, both of which were key demands of the demonstrators.

The emergency law permitted the government to make preventive arrests and override constitutional and penal code statutes. The security court was a special body that prosecuted people regarded as challenging the government.

Protesters have said more needs to be done.

Information Minister Adnan Mahmoud confirmed on Friday that a comprehensive national dialogue will be held in various provinces, and that the government is considering the implementation of political, economic and social reforms.