Another Friday is around the corner and authorities in Syria are reportedly bracing for the possibility of huge protests throughout Syria as more than 800 protesters have been killed and tens of thousands have been jailed since the uprising began about 8 weeks ago .

The Facebook group, The Syrian Revolution 2011, which boasts more than 174,000 followers and which has emerged as the organizing force behind the demonstrations that have been demanding “freedom” in Syria has called for nationwide protests this Friday May 13 to honor the women who were arrested by the authorities .

The group posted this poster on its Facebook page which shows the pictures of the women that were arrested and which reads : Friday May 13 for the sake of the dignity of our jailed sisters …together for freedom

Syrian government forces have expanded their crackdown on public opposition. On Thursday they deployed tanks around the historic city of Hama, where the Syrian regime crushed a revolt almost 20 years ago.

Tanks and military personnel remained positioned to intervene further in the flashpoint cities of Homs, Banyas, and Daraa.

The city of Homs, shelled by army tanks Wednesday, was quiet on Thursday , but most shops and businesses were closed and streets appeared deserted.

Security forces and government militiamen also reportedly arrested scores of people when they broke up a demonstration by several thousand students at Aleppo University late Wednesday.

The Syrian government has been imitating the tactics used by other governments to suppress the demonstrations, particularly the methods used by the Libyan regime. They are also using professional snipers who target the heads of the demonstrators, using bullets that explode inside the victim’s head leaving horrible mutilations, in order to terrorize people. The government also continues to recruit “thugs”, pro-regime armed groups that are involved in trafficking of drugs and weapons, to spread chaos and create sectarian strife. Those thugs have been firing on people from speeding cars and motorcycles. They have also been infiltrating demonstrations to spread provocative sectarian slogans.

Some people may wonder what drives demonstrators to the streets despite the threat of death at the hands of the brutal security forces. The reason according to observers is simply that the Syrian people have come out to tell the world that they will never again be silent about the massacres committed in Daraa or the regime’s efforts to starve and terrorize its own people. Syrians will never again be silent about the regime’s atrocities committed against its own Syrian brothers. The age of silence is over and the age of freedom has just begun. 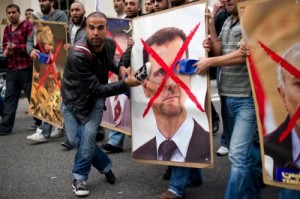 The arrests have transformed Syria into a large prison . The authorities according to Human Rights organizations are using Soccer stadiums as prisons because they ran out of space in their regular prisons which are far too many.

Syrian president Bashar al Assad is reportedly determined to crush the 8-week-old revolt, which is the gravest challenge to his family’s 40-year-old ruling dynasty. Assad inherited power from his father in 2000, and has maintained close ties with Iran and Islamic militant groups such as Hezbollah in Lebanon and Hamas in Gaza.

According to observers the Syrians should hit the streets in much larger numbers… in the millions and not in the tens of thousands .This according to the observers will force the world community to take more drastic action against the Syrian regime ..