An earthquake of 4.5 degrees on Wednesday rocked south-eastern Spain, causing some damage but no injuries, officials said. 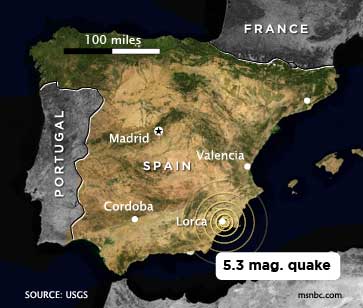 The tremor had its epicentre near Lorca in Murcia region. It damaged the facades of some buildings, and dislodged furniture inside homes, according to media reports.

At least four people were killed when an earthquake hit the small town of Lorca in the southern Spanish region of Murcia on Wednesday, the town’s mayor said in a radio interview.

“Unfortunately, we can confirm four deaths due to cave-ins and falling debris,” the mayor of Lorca, Francisco Jodar, told radio station Ser.

Seven people were killed Wednesday when an earthquake struck southeastern Spain, the delegate of the government in Murcia told National Spanish Radio.

It was preceded at 3:05 p.m. by a 4.5-magnitude temblor centered in the same area, the survey said.