Egypt: 8 killed in clashes between Muslims and Christians

Clashes between Muslims and Christians in the Egyptian capital Cairo left eight dead and more than 100 others injured and a church was set on fire, officials said. 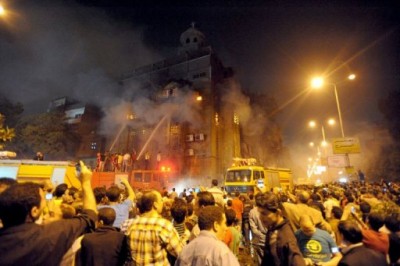 The two groups clashed in the northwestern district of Imbaba on Saturday after Muslims attacked the Coptic Saint Mena church to free a Christian woman they alleged was being held against her will because she wanted to convert to Islam.

A parish priest, Father Hermina, told AFP the dead were Copts who died when “thugs and (Muslim fundamentalist) Salafis fired at them” in the late afternoon attack.

Ali Abdel Rahman, the governor of Giza, told state television that “the number of wounded has exceeded 100 and there are eight dead.”

The Gospel had been laid on a body wrapped in a sheet that was lying inside the church. The church floor was bloodstained as wounded Christians were brought into the church for treatment. AFP