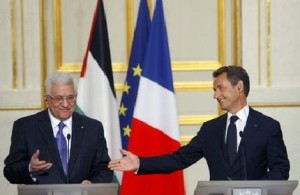 The comments published Thursday — similar to a message from Britain a day earlier — suggest Europe may be inching toward a watershed moment, joining those in favour of recognizing Palestine even if there is no peace deal with Israel.

However, German Chancellor Angela Merkel reiterated Thursday that she is opposed to any unilateral move.

Sarkozy’s comments were published shortly before his meeting with visiting Israeli Prime Minister Benjamin Netanyahu, who is touring Europe to rally opposition against the Palestinians decision to form a unity government. Netanyahu says it is impossible to talk peace with a government that is set to include the Islamic militant group Hamas.

But so far, Netanyahu appears to be making limited progress. Western governments have called on Hamas to moderate its views, but are also urging Israel to make a new push for peace.

Speaking to the weekly newsmagazine L’Express, Sarkozy was quoted as saying if talks between Israel and the Palestinians don’t resume over the summer, France will help promote the international recognition of a Palestinian state.

“The idea that we have time is a dangerous idea, we must finish,” Sarkozy said.

Speaking briefly to reporters after leaving the Elysee Palace, Netanyahu was unconvinced.

“A serious quest for peace can only happen through negotiations” between Israel and the Palestinians, “not a U.N. dictat,” he said.

And he suggested he had no doubts about Hamas’ intentions.

He said the idea of a state should be to end “the conflict as Israel and anybody interested in peace wants,” not “to continue the conflict as Hamas wants.”

If Palestinian national unity “is unity for peace then we would be the first to support it,” Netanyahu said “But if it’s unity to move away from peace and to pursue the battle for Israel’s eradication then obviously we oppose it and so should everyone else.”

Peace talks between the Palestinians and Israel broke down last September with the expiration of an Israeli settlement freeze in the West Bank. They say there can be no talks if Israel continues to build homes in the occupied territories.

With peace talks stalled for months, Palestinian officials say they will ask the United Nations to recognize their independence in September with or without an agreement with Israel.

Palestinians say their state should include the West Bank and Gaza Strip, with east Jerusalem as the capital. Israel captured all three areas in the 1967 Mideast war, although it withdrew from Gaza in 2005. Netanyahu has said the borders of a future Palestine must be negotiated.

Palestine is already recognized by dozens of countries but not by the United States or most European nations. France’s endorsement would be a major setback to Israel and could spark a trend.

In a key step for their U.N. campaign, Palestinian factions Hamas and Fatah agreed Wednesday to form a unity government and end a four-year rift that has left them divided between rival leaderships in the West Bank and Gaza Strip.

Fatah, which dominates the West Bank government, favours a peace agreement with Israel, while the Iranian-backed Hamas government in Gaza opposes Israel’s existence.

World capitals have reacted warily but have not ruled out dealing with the new government. Instead, they are expressing hope that Hamas will assume a peaceful posture.

German officials have made it repeatedly clear over recent weeks that they would not support a unilateral Palestinian declaration of statehood and Merkel said nothing had changed.

“We want a two-state solution,” she said Thursday. “We don’t think unilateral steps are further helpful.”

She said despite Sarkozy’s remarks, both Germany and France are pushing for the same thing — the resumption of negotiations.

“We believe we should concentrate on that, and I think France is also working in this direction,” she said.

Abbas said the unified Palestinians will promote peace, not hinder it.

“The signing of the reconciliation between the Palestinians will not have any influence on the peace process,” Abbas said. “Quite the opposite, it will support the process and strengthen the two-state solution.”

He said Palestinians are willing to accept the outlines of a peace agreement proposed by Britain, France and Germany.

That proposal calls for an immediate halt to settlement activity by the Israelis, a solution to the question of Palestinian refugees and agreement on the status of Jerusalem as the future capital of both countries and on borders before the 1967 Mideast war, with approved land swaps. It also calls for security arrangements that respect Palestinian sovereignty and protect Israel, and prevent a resurgence of terrorism.

“We have said that negotiations are the way for reaching a solution,” Abbas told reporters. “We explained again that we are willing to accept the three-party solution that Germany, France and the UK have given the Security Council as the basis … for the return to the negotiations.”

Sarkozy has long promoted a greater role for France and Europe in the peace process. He was expected to discuss a relaunching of the peace process in his talks with Netanyahu later Thursday. France “expects him to take the risk of peace,” Sarkozy said in the interview. AP