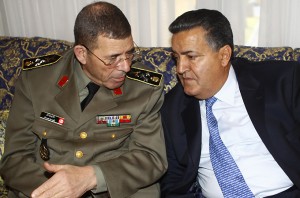 Tunisia’s former interior minister has warned that lingering members of the country’s former political elite may carry out a coup d’etat if Islamists win a majority in the upcoming election.

“If al-Nahda takes power, there will be a coup d’etat,” Farhat Rajhi, who served as interior minister after the Tunisian uprising, said in a video that has circulated widely among Tunisian Facebook users.

The video was first posted to Facebook late on Wednesday evening, and by Thursday morning had captured the attention of Tunisia’s vibrant online sphere – which acted as a virtual rallying space for Ben Ali’s critics during the uprising.

Rajhi warn that a clique of “Saheliens” – a reference to the rich coastal region of Monastir and Sousse, where many of the former regime’s most powerful members from – may ask the head of the country’s military, Rachid Ammar, to step in should the Islamists dominate in the election.

With Tunisians due to vote for a constituent assembly on July 24 – a body which will be tasked with writing a new constitution and deciding on the shape of the political system that will replace the decades of the single-party rule – Rajhi’s statements have raised fears that members of the former elite will somehow find a way to keep their grip on power.

Yet al-Nahda, the Islamist party led by Rachid Ghannouchi that is likely to win a sizable part of the vote in July, downplayed the speculation of a putsch.

“General Rachid Ammar has promised the Tunisian people that he would protect the revolution and we are confident that all will take place in a peaceful environment,” Ajmi Ourimi, a representative of the newly legalised party, told Tunisian radio.

His former party, the Constitutional Democratic Rally (RCD) party, has been disbanded by the court, and its senior members barred from running for office, key demands of Tunisian protesters.

Rajhi accused a clique including Beji Caid Essebsi, the country’s interim prime minister, of preparing large funds to buy votes to re-establish themselves on the political scene under the cover of new parties.

Rajhi also warned of the behind-the-scenes role played by Kamel Ltaief, whom he dubbed as “the Shadow President”.

Ltaief was a close friend of Ben Ali until he fell out with the former president over his marriage to Leila Trabelsi. He is considered the architect of the 1987 bloodless coup that brought Ben Ali to power.

Ltaief categorically rejected the allegations in an interview with the Shems FM radio, denying that he had ever met Rajhi.

“I’m a patriot who is serving his country. I’ve been in politics since the 1980s,” Letaief told the radio station.

“Farhat Rajhi has barely entered the political scene and here he is accusing the Tunisian army!”

When questioned by the interviewer about his role advising the current prime minister or whether he had been involved in nominating Caid Essebsi, Letaief avoided a direct

The interview earned the former interior minister a show of support on a Facebook page dedicated to him.

“Bravo Mr. Rajhi, I’m with you 100 per cent. The Diktat of the Sahel [coastal region] has suffocated us for 50 years … Why this monopoly?” Habib Guetari wrote.

Others expressed concern over the political uncertainty that continues to characterise the North African country in the aftermath of January’s uprising.

“I don’t trust anyone anymore!” Liliane Van Mol-Chekir wrote. “It is shameful to see what is happening now!”

Rajhi, who was appointed to the post in late January, is popularly referred to as “Mr. Clean”.

His sacking came in a surprise move which drew a storm of criticism from bloggers.

A lawyer by profession with little experience in the world of politics, Rajhi won widespread popularity for his blunt, often humourous, statements during his short time in government. His attempts to open up the ministry – the hub of the former regime’s repressive apparatus – to public scrutiny included the creation of an interior ministry Facebook page allowing interaction with Tunisian internet users.

His “outsider” status may have drawn praise from online commentators, but some within the political establishment viewed it as a liability. They argued he was unsuitable to the role of interior minister and that he was ostracising Tunisia’s police officers.

“As if by chance he didn’t realise he was being filmed?” Emna B.A. wrote in an opinion piece for the website Espace Manager, questioning whether Rajhi could really have been unaware that the 20-minute conversation was being filmed by a hidden camera, as claimed.

“He accuses everyone, and only wants to come out of this as a national hero!” she said.

When protesters forced political reform in neighbouring Algeria more than a decade ago, the country’s military halted the democratic elections when the Islamic Salvation Front (FIS) was heading to a landslide win.

In the bloody civil war that followed, some 200,000 Algerians were killed.

In another twist, the news website nourpress.com published a communique claiming ownership of the video, which, it said, had been “pirated” from its site by a hacker and released on Facebook without its permission.

Withinin hours of releasing the statement on its site on Thursday afternoon, nourpress.com had been taken offline.