crude oil tumbled below $100 a barrel 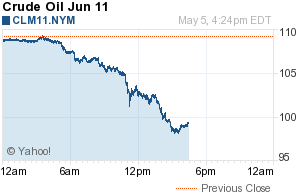 Oil plunged more than 8 percent on Thursday, heading for the third biggest daily drop in dollar terms on record, as concerns about economic growth and monetary tightening spurred a sell-off in commodities.

“The longer-term bull cycle is still in place, but this correction may have a life span of several months, as weaker economic data is fueling this correction to a large part,” said Sterling Smith, senior analyst for Country Hedging Inc in Minnesota.

Brent crude futures for June traded down $10.28 to $110.91 a barrel at 2:10 p.m. EDT, the fourth straight day of losses, smashing below the 50-day moving average as the sell-off picked up steam after prices dropped below $120 a barrel. Brent was headed for its biggest one-day drop in dollar terms since shortly after the collapse.

The disruption of oil exports from Libya, concerns about the supply impact of unrest in the Middle East and Africa, and the weaker dollar have sent crude to the highest level since 2008, with Brent topping $127 a barrel this year and U.S. crude over $114 a barrel.

Selling pressure on oil and other commodities came on several fronts this week, with investors weighing factors from the death of Osama bin Laden to the impact of higher fuel and commodity costs on the economies of consumer nations to monetary policy in major economies.

“Crude oil is selling off sharply for two primary reasons: QE2 is coming to an end in June and without a QE3 behind it, it will take liquidity out of the market, hurting risky asset classes such as commodities,” said Chris Jarvis, senior analyst, Caprock Risk Management in New Hampshire.

“With Osama bin Laden dead, the market is adjusting the geopolitical risk premium down accordingly. Given this, speculative money is being taking off the table.”

The euro headed for its biggest slide against the dollar since November after the European Central Bank hinted interest rates were unlikely to rise next month, short-circuiting a rally that had driven the currency to a 17-month high. Reuters